The Monterey is a booster made by Sunshine Kids. It is designed for children 38"-63" weighing between 30 and 120lbs.

They say it is for children 3 and up.

It is useable as a highback or backless booster and is unique in that it can be installed with latch to prevent it becoming a projectile when the child is not in it.

I recommend not using a booster until at least age 5-7yrs old, preferably harnessing the child as long as possible, despite it allowing a 3yr old.

I bought this booster for my 6.5yr old son who is already too tall for other highback boosters and was using a backless Cosco High Rise (handed down from his brother who had used it less than 1yr).

I not only wanted to have a more secure and wider seat for him, but I wanted to get him back in a highback booster since he is so young, but very tall.

I let him choose between this and the Nautilus (to use only as a booster), and he chose this one because it came in red, expanded in width, and had two cupholders. He also liked that it didn't have harnesses at all, distinguishing it from his sister's nautilus in that way.


When it arrived, I opened it and quickly fell in love. The headwings looked so thick and nicely spaced... perfect for even my head.

I pulled the booster out, loving how sturdy it felt... sure, it was heavy, but it just felt more substantial than most boosters. Anyone who has felt some of the lightweight boosters will know what I mean by that.

I assembled it and was pleasantly surprised by how BIG it looked at it's lowest setting. In fact, after having tried my 42" 4yr old in it, even she, with her super long torso, just barely fits the lowest setting to use. Most boosters, she was able to fit at 2yrs old (though she has never ridden in one).

This was amazing to me... they finally have designed a booster for the big kids, the ones who really should be in them.

The padding is amazing, very soft, but I do not like how complicated the cover is to remove for washing, though it isn't too big a deal.

The grey part is soft, the red is mesh.

The back was easy to adjust and the side wings expand easily.

The seat is so deep that my 6.5yr old now has a seat his knees don't come to the end of... a first in boosters.

The cupholders (which only matter to the kids) really hold cups well... they are deep and sturdy and my son can actually pull them out and push them in while sitting in the booster. 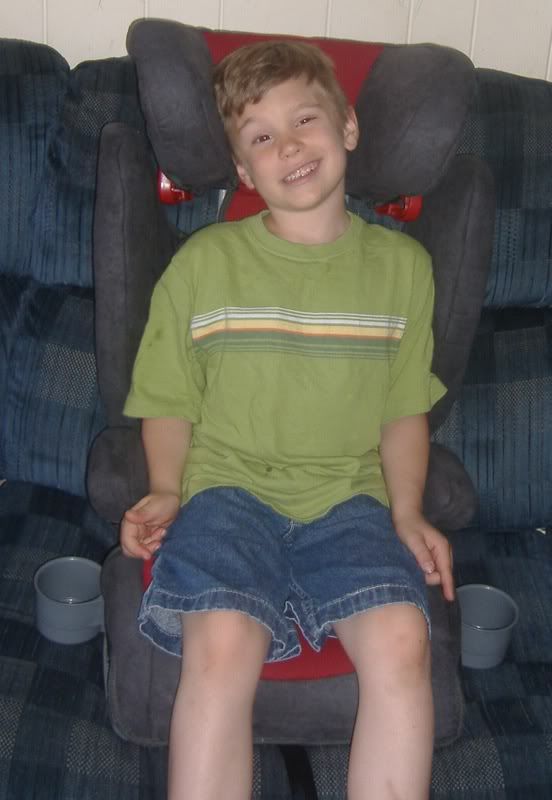 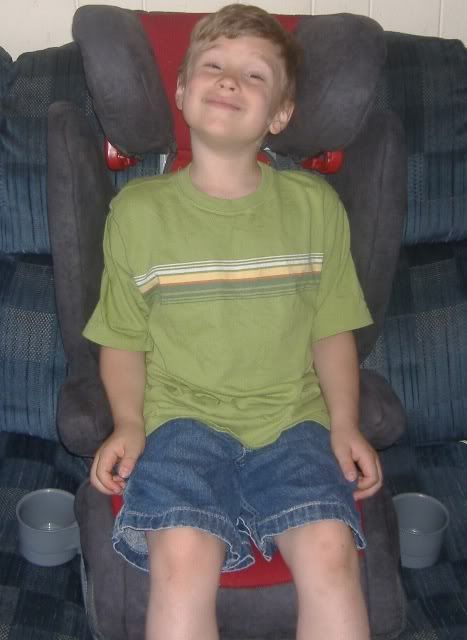 These were when it was adjusted for his height 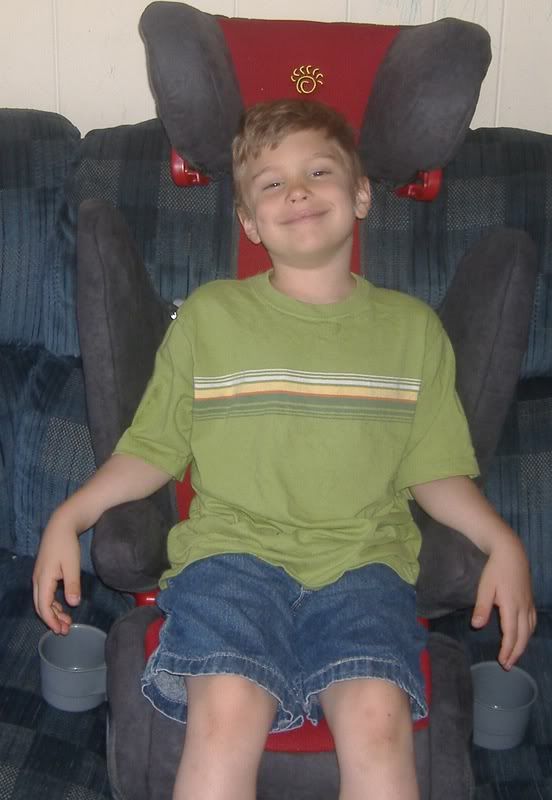 He had to have the cupholders out in the pics because he loves them.


And here he is in the car 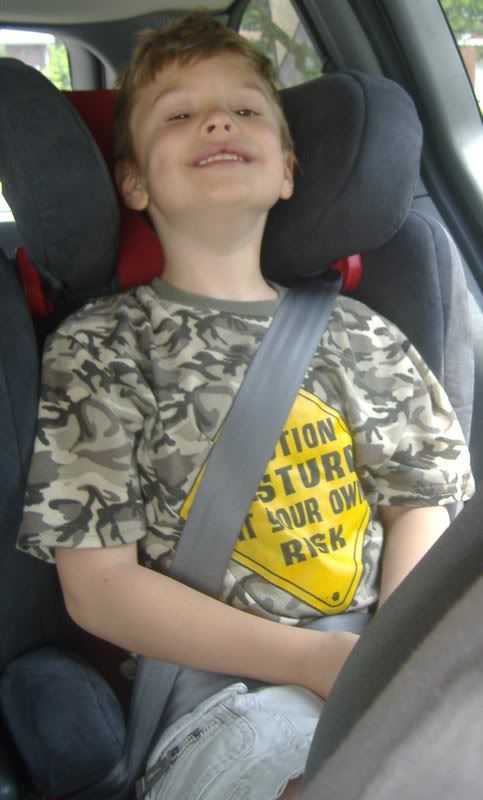 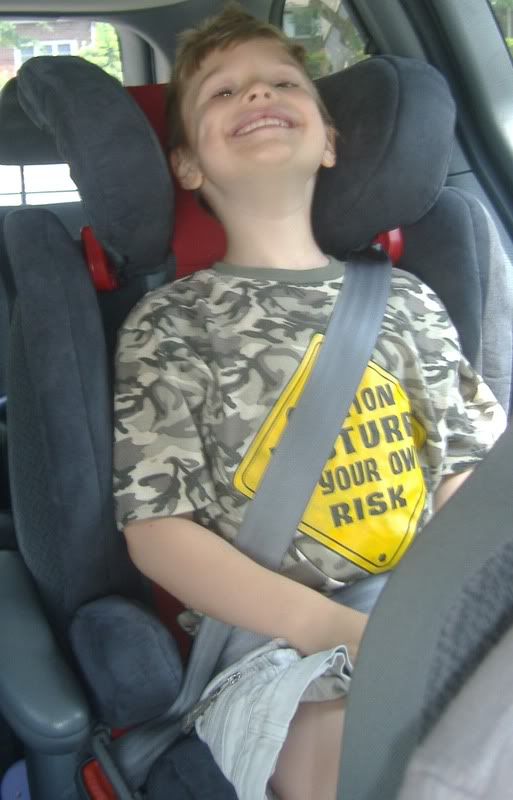 Even his brother, who rides in a seatbelt as he outgrew his backless booster and is 4'9" and passes the 5'step test had room to go... if he would even consider going back in a booster (of course, I don't have space in my third row for this booster at the heights they need it, so I'm not picking that battle)

He had less in the car... only 1" until his shoulder would go at the belt guide, which, from moving the headrest to that point, seems to make the belt twist, so I doubt it would be good. He used it yesterday (the 4th of June) to go to and from his psych appointment since it was there, but he said that he didn't NEED it, so not to spend the money... that he fits the seatbelt fine... he just wanted to use it since he wanted to sit in the captain's chair and I wasn't uninstalling it. 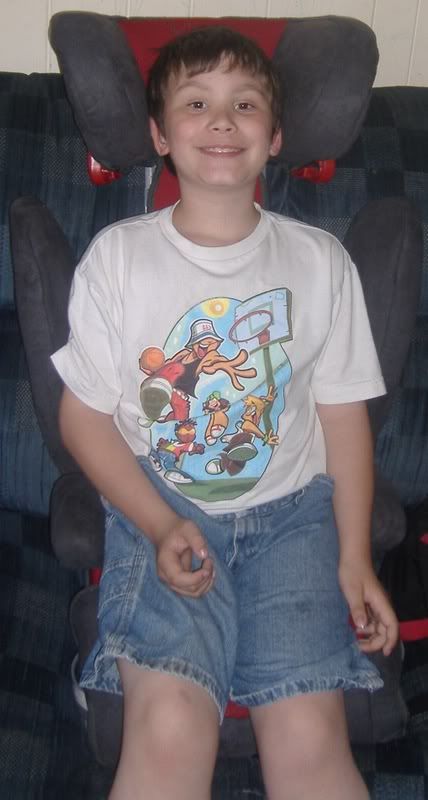 He made me promise not to take pics of him using it in the car... again... I pick battles with this one... he demo'd it for me in the house... that's all I can ask.

But here is him in his seatbelt (he was slouching a bit... he had JUST gotten in the car... and he was tired from school... I reminded him and he sat up straight) 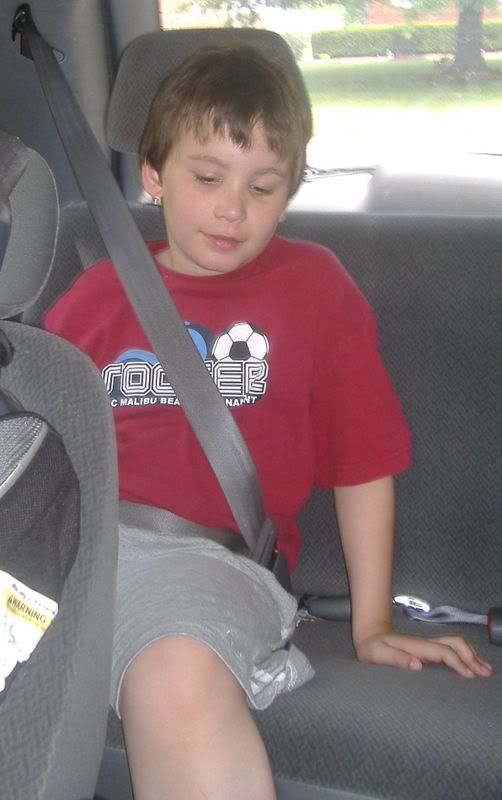 The pic is of it fully heightened and widened.
In the car, he had to use that position... so he lost 1"... in the house, he would have used the next to the top position, but again, he wanted the pic taking over fast.
Last edited: Jun 5, 2008
M

Latest member
Will and Emma's Mom