Unless I'm missing something, the 2013 LATCH manual completely leaves out the information on Suburbans earlier than the '01 Model year.

There's the Service Bulletin that talks about retrofits, but it doesn't include part numbers. I don't feel too confident that my dealership will be able to figure out what needs to be ordered.

From memory, my understanding is that 2nd row tethers are a part that buckles into the seat belt in the 3rd row, and 3rd row tethers are the outermost cargo anchors for outboard positions, and a strap that attaches to both those cargo anchors for the center position. Is that right? Is there any official documentation of this that I can get? The 2013 LATCH manual is the first one I've owned, so I don't have an older one to refer to.

I just found out that a family member had moved her FR85 to her '99 Suburban, installing it 2nd row center with the passenger side tumbled forward for access to the 3rd row, and since the whole FR85 falls over sideways she fixed that by using the D-ring that came with the Radian to create a tether point under the seat . I told her she can't do that, and she needs to bring the Suburban over so we can work out a solution. I'm hoping to have some tethering options available so all the FF seats won't just be untethered. She does day care and needs to have 5 kids in the car. Most are booster age, only one RF infant/toddler, but at least she knows in the lap-belt positions they need harnesses.

I also vaguely remember something about a part that couples with the third row seatbelt buckle to create a tether anchor for use by a second row FF carseat installation in the Suburban, but don't recall specifics about the model year(s) it was used for, nor details about third row tether anchors/retrofits. You might find prior threads here possibly with part number information if the search feature cooperates. Barring someone who had a '99 Suburban retrofitted and noted the part number in a prior thread here (or maybe on another board if you do a wider search), and because even a previously posted GM part number may potentially have changed since then, you'll need to check on the part info. and availability through a GM dealership, or contact GM corporate if the dealership doesn't know/doesn't come through with the part info.

Thanks. I wonder whether anybody has any official documentation concerning the rear cargo anchors as tether anchors for this vehicle? I am pretty sure I can find the thread where I heard of this, but before I go advising another parent I'd like something a little more concrete than "Someone else said so on CSO." I was sure I'd find it in the LATCH manual and was very disappointed to see it wasn't there.

The posts that talk about these tether points are here:
http://www.car-seat.org/showpost.php?p=535715&postcount=6 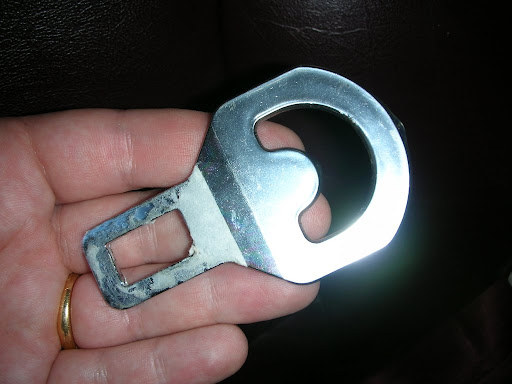 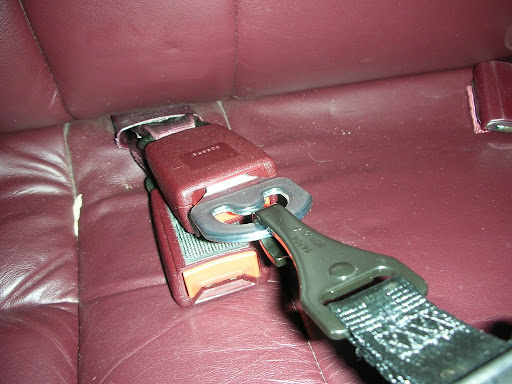 This is all for the third row seating: both outboard seats use the rear-most cargo anchors (these are drilled through the frame). And the center seat uses a strap (the retrofit) that attaches to both outboard cargo anchors and then has a ring in the middle to hook the tether. It's not clear whether or not the center AND outboard anchors can be used at the same time. So I would assume no. This picture shows both--the My Ride using the passenger outboard hook, and the retrofit strap installed. The blue strap coming off the (black) retrofit strap is not a tether, just a cargo tie down strap used to illustrate how the retrofit works. Didn't feel like flipping the RF RN that's in that seat just for this picture! 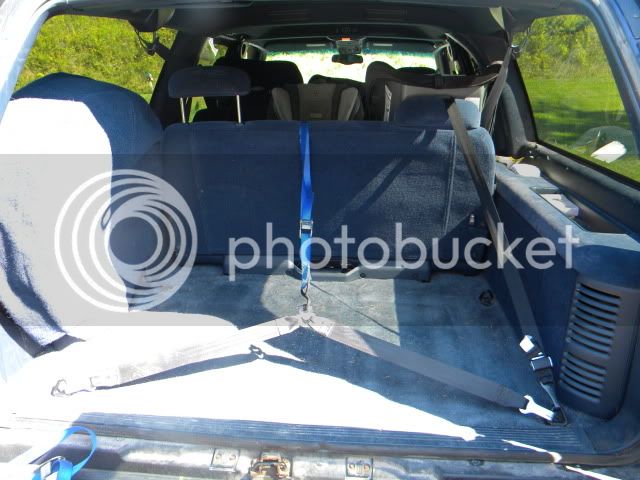 So, what I'm hoping for is some documentation... not so much maybe for the retrofit parts, since if I can get those parts out of GM presumably they'll come with instructions that will suffice for documentation, but moreso for the idea of using those rear cargo anchors without any retrofit parts added.