How important is rf tethering in a truck? I have it stuck in my head that the rf tethering is good to prevent rebound into the back window. Right now, we have a Diplomat in DH's 2004 Dodge 1500 and it fits perfectly. There is not a lot of front to back room in this truck, so when our other seat (Marathon) is in there, I am practically on the dash. It can go in the middle, but DH struggles with it there. Why, I have no idea. Anyway, she is going to outgrow the Diplomat before I am ready to turn her, I think, so we need to find something that will work in there. The Radian is totally out, since it barely fit in the middle and wasn't even close to fitting outboard.
I am seriously considering a Symphony 65. My friend has one in her Focus and she swears it is shorter in there than the Marathon. That really appeals to me for the truck. My only concern is the lack of the rf tether. Any thoughts?

Why won't a Radian fit rf in the middle? It should be perfectly between the front 2 seats. Here is the Radian rf in dh's 2500 Ram. 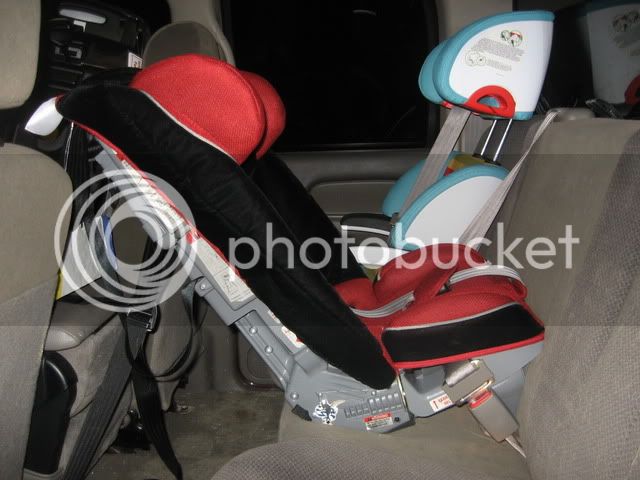 No advice here...I just bought a MA to put in dh's 2009 Ram, replacing the RA. It would fit fine outboard, but dh wants her seat in the middle. That way, he only has to take out the girls' Ollis if he's going to have other passengers. I think the MA in the middle doesn't bother him because he had to put up with a rfing TFP there for a while. Now, THAT bothered him, lol. Really, though, I haven't found the MA to take up that much more room than the RA. His truck is a crew cab, though, so the back seat is pretty big.

I was determined to have either a rfing tether or ARB for dd in his truck. Dh concurred.

Oh, the Radian doesn't work well in the middle because I, uh, might have broken the locking latch plate and now have to use a locking clip. I struggled with it for 20 minutes trying to get the clip on. It ends up partially in the belt path, which then makes it impossible to buckle. Also, when I tighten the Radian, which is a PITA, it becomes more reclined. DD was at 45 degrees and not happy.

The Marathon does work nicely in the middle and outboard, as long as I move my seat up, otherwise it's too upright.

I would have no problem with a seat that is not tethered rf. If you want the symphony and it works for you get it. I just don't worry about kids hitting the window in an accident. If it was a common injury we would be hearing about it! Someone please correct me if I'm wrong, but I have never heard of a kid being injured in a truck because their rf seat was not tethered. I am not saying that in a snarky tone at all! I am just saying don't worry. Get the seat you want that works for you!

Why not a TFP?

Just remember that the concern with a RF seat rebounding into the glass is actually a THEORETICAL issue. We have no injury data suggesting that it's actually something to worry about.

Lap/shoulder belt in the middle, or lap-only?

My dad's currently in town and we're riding in his F350 a lot. I have readily available 2 Radians (RF tetherable) and a ComfortSport (no RF tether). I don't particularly care which seat is in the truck, I'll grab whatever is most readily available when I go to install. I agree with Mish, I just don't think it's that common or that important.

Well, I should say I have a slight preference for the Radians in the truck, but only because the CS install is acceptable, but I feel the Radian gets a better install. But whatever, I'll put in the CS that's sitting in the garage rather than pull the Radian out of another vehicle, just because it's easier.

skaterbabscpst said:
Just remember that the concern with a RF seat rebounding into the glass is actually a THEORETICAL issue. We have no injury data suggesting that it's actually something to worry about.
Click to expand...

Thanks! That is what I was trying to say, but you said it much better and with fewer words.

No headrest on the middle, but there is a lap/shoulder belt. I have ruled out the TFP after I tried it this weekend. I hate the continous harness and the rf lock-offs were hard for me to get to. I am also considering the Triumph Advance. I don't know why I worry about the window and the explanations of why not to worry make sense to me. Now to find a Symphony that is not $190. My Marathon was less than that. LOL!

If you find something to fit outboard, you wouldn't have to worry about rebound.

I would rather have the known added safety of the center position over reducing a potential rebound issue. :twocents:

I was just coming back to say, um, get the belt fixed?

I absolutly LOVE my EFTA for fitting RF in my tiny 2 door car. It has a very small back seat & this is the seat that fit the best. It could be right on the 30 degree mark & still no head slump from Marcus at about 21 months old. Here is a picture of him in it sleeping soundly at that age at around 30-35 degrees. 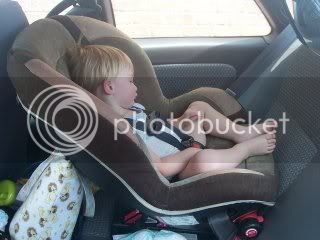 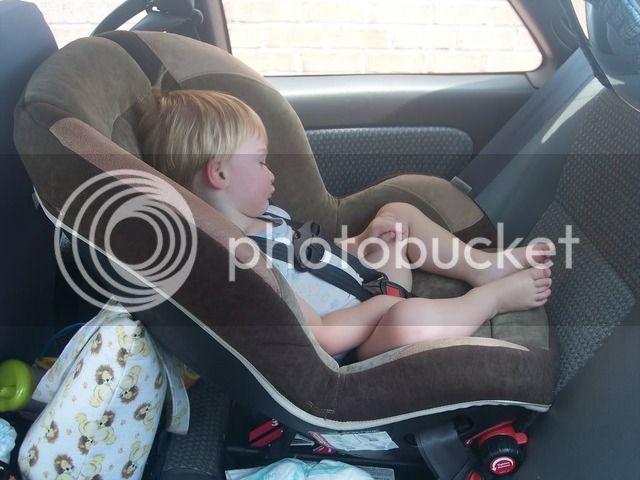 See how nicely his little head just went to the side & not down to his chest. Another option might be the My Ride. Have you tried it? I would try those 2 to see what might fit outboard. Both fit really well RF in my tiny 2 door. :thumbsup: Good Luck! I hope you find something that works for you.

I could get the belt fixed, but I hate lightweight locking latch plates and if it's broken, I have a good excuse to not us them. LOL! You like that reasoning? I am not a fan of the Myride. That thing is HUGE and the Evenflo convertibles seem so much more sturdy. IDK, I think we are going to go to BRU and try a bunch out.

cpsaddict said:
IDK, I think we are going to go to BRU and try a bunch out.
Click to expand...