My phone was dead and all I had to take pics with was my slr with a 50mm lens. Not exactly the easiest to take a quick snapshot of a seat when you have about 8 feet to park in and a huge embankment on the one side...trees on the other. I inched down the mountain and held onto the open car door enough to get what I could of her in the pic for the side view. I'm amazed I didn't tumble to the same fate as my decathlon, as I'm the most uncoordinated human on earth.

I first installed it with the seatbelt. It went in fine, with no trouble but because my seatbelt stalks are somewhat forward of the bite and are fixed stalks, it made it recline so far that it seemed sort of awkward, lol. We were on our way to the grocery store and I just left it for the time being. I ended up not really liking it and installing in the Wal-Mart parking lot with LATCH, lol.

I'll get pics of the difference tomorrow, but it's a little more upright.

I also had to recline the seat back for the MR to fit under the stupid angled head rests of the Commander, but it matches the natural recline of the MR exactly, so it's not a problem.

The install was easy though, as in no man handling necessary for a good and tight install.

I have to say I like the separate latch straps for RF and FF. It's nice not to have to re-route the strap. 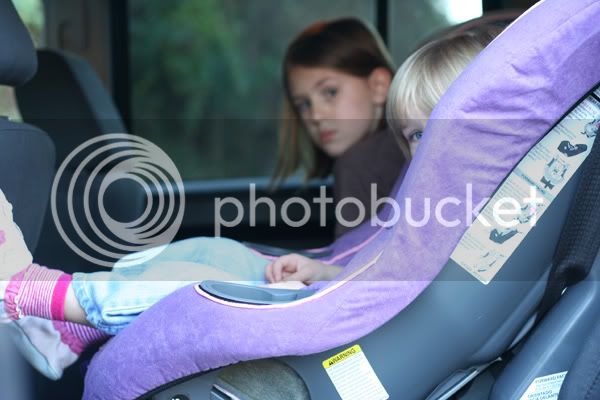 In these pics, it sort of looks like the straps are below her shoulders. It's just that it was so reclined and I am sitting lower in the front seat. Once I re-installed with LATCH, she could almost use the third slot. 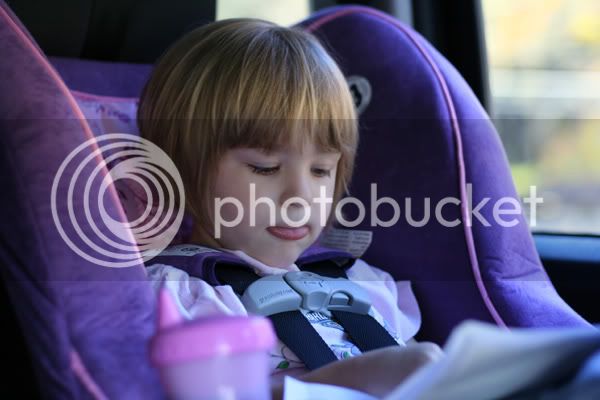 Head falls nicely to the side . 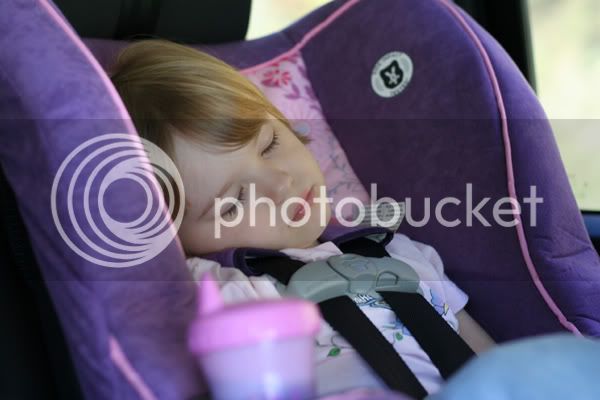 I do wish that the buckle was adjustable. It's like 4 inches or so in front of her. But, because the tongs are rounded, it's not as pokey like the more angular buckle tongs are. Doesn't come anywhere near her g-button and I can tighten it up real snug without putting extra pressure on her belly, even with the angled-in crotch buckle. So, I'm ok with it. I think this really is THE seat, at least for us. Easy to install, no head slump, no belly pain....and I can still RF her when I need to.

Everybody do the happy dance with me.

Hurray!! She looks perfect I LOVE that cover!!

Of all the seats that I ever tried out for my dd, she loved the MR the most. She called it her purple princess seat, and sat in it like a throne.

Happy Dance Happy Dance!! She looks great and I also the purple. The cupholders are awesome! Man, I'm so tempted to try this again!

Yay! A gorgeous girl in a pretty seat! She looks great. I'm glad to hear that it's working out well for you so far. :thumbsup:

Yay ! I'm so glad you found a seat that meets all your needs and it installs well I love that cover and your dd is adorable !

i love her haircut!

and she looks nice and comfy in the MR

She looks great and so does the seat!
A

she looks so comfy & cozy in there. i think my DS would love the recline too.

the purple is very pretty too

Yay! I agree that it could use multiple buckle positions. It's not as noticeable when DD is rf'ing, but on the occasion I put her ff'ing, I do have to do the rolled washcloth thing.

I never noticed before how really tiny your DD is! I mean, I know you say she's tiny, but seeing her in the same seat DD made me notice....she's about the same size as DD! Absolutely adorable though! I was a tiny kid too, always the smallest in my class by far...I'm still short, but not horribly so. It was annoying though for a long time people thought me and my little sis (3 years younger) were twins. We wore the same size clothes forever. She was taller than me by the time she was 12 and I was 15. LOL

I the first pic of her peeking out.

I to my MR for either a FF install or RF install. It is just SO SO easy to isntall. I am glad that you found a seat that works well for you. WOOT! Your DD is a doll btw!

She looks so good in it!

She looks comfy in it. I too lover her hair it's really cute
M

Thanks everybody. I think she's pretty cute too, lol. We had an unexpected road trip today. My mom is going through chemo right now and her hospital is a few hours away. I alternate taking her with a couple of her friends. Anyway, it wasn't my turn this week, but they office messed up and she ended up having to stay the night (it was supposed to be yesterday) and getting it today. So I had to go pick her up as her friend needed to come home. Anyway, short story long...even though she already slept in it yesterday-since she falls asleep anytime she's in the car more than 10 minutes, lol-it was super nice to peak back and see her sleeping so comfy in her new seat. No crabs when she woke up!!!! I'm so happy. Keeping her FF might not happen. We had two cars pull immediately out in front of me today, and I was able to avoid them but did have to stand on my brakes. DD was like WWOOOOOOHHH! and kind of freaked out a bit. She's not used to that feeling I guess, being flung forward like that. I told her that happens when she faces the front, but not when she faces the back. She goes "Well, I'll have to think about this." LOL!


Shaunam said:
Yay! I agree that it could use multiple buckle positions. It's not as noticeable when DD is rf'ing, but on the occasion I put her ff'ing, I do have to do the rolled washcloth thing.

I never noticed before how really tiny your DD is! I mean, I know you say she's tiny, but seeing her in the same seat DD made me notice....she's about the same size as DD! Absolutely adorable though! I was a tiny kid too, always the smallest in my class by far...I'm still short, but not horribly so. It was annoying though for a long time people thought me and my little sis (3 years younger) were twins. We wore the same size clothes forever. She was taller than me by the time she was 12 and I was 15. LOL

I the first pic of her peeking out.
Click to expand...

Yeah, she's a squirt. It's hard to tell from pics really. But getting to compare in seats like that does sort of show it. She's pretty much in 24 months clothes. My older dd was always sooooooo tall. She still is, actually. She's in junior 00 petite jeans and just turned 8. Dh and I are both above average height, so little dd kind of sticks out in the family. Nationwide Children's is working on getting everything approved for an admittance and testing. We might get her growing. I'm not sure she'll ever catch up now, but I'd like to see her find a curve for once.

Do realize that Fiona has not stopped begging me for an alma myride since she saw this pic, I tried to show her every other girly car seat in the world but no alma my ride is a must have, she even asked me for it for her birthday lol
F

I love that car seat cover. I really want one but it seems so reclined. I think it looks great.

menfusse;1043160 Yeah said:
She is so adorable and the seat looks like a great fit for her!!

You must live close to me?! Nationwide Children's is about an hour away
Click to expand...

It is very reclined, which is why we actually got it. She wanted to FF, and considering she'll be 4 in 3 weeks, I'm taking her thoughts into consideration, depsite her size. She sleeps in the car every time we are in it, and we do a lot of long road trips, so the head flop was horrid and made for a cranky sore girl.

Actually we aren't close to Nationwide at all, lol. We are in southeastern KY, so it's about 6 hours away. It's just where she's ended up with all her belly issues. They have a great GI/Motility dept. and her local docs are hoping they can get her sorted out better than we have been.

menfusse;1044363 Actually we aren't close to Nationwide at all said:
Gotcha:thumbsup: I thought maybe you were a Central Ohioan, too...I was excited there for a second,lol.
Click to expand...