Virgin Atlantic - What can I expect with their provided car seat?

Any ideas? Will it only be allowed for use during cruising?

I honestly couldn't say for sure but from looking a thread on the Babycenter forums following a google search, I would guess the seat is used from the moment you board the aircraft - i.e. before take off, throughout the flight and for landing and taxiing.

The second post in the Babycenter thread, would imply the seat is installed prior to take off.

If you have not already done so, I also suggest reading the Flying with Children & Babies Virgin Atlantic website pages for information about booking a child seat (as I understand it, a minimum of 12 hours notice is required to book a seat). They say on the website that in-flight cots for babies are installed by the cabin crew so it would make sense the policy is the same for the child seats, although I recommend contacting them to confirm this.

I hope that helps.

I have some pictures that I grabbed very quickly while using one for our then 16 month old. I would not recommend it. It's better than a lap baby, but still.

I'm not sure what your situation is, but I know for us we got cheaper tickets with VA because of credit card rewards, so that is who we went with. I was led to believe by a representative on the phone that we could use out own car seat. But that was false. I faught as hard as I could, but to no avail. We used the "child seat" the whole flight, from take off to landing. We had very bad turbulance on the way and my poor DS was sleeping as best he good but the seat was just so awkward he was thrown about. I made the parental decision to hold him a couple of times because his neck was getting so strained.

Here are a few reasons why I would never do it again:

1) The seat is not very comfortable. Bad head slump and the crotch strap is so far out that the child slumps down. I stuffed a sweater there and it seems to help, and though DS was a champ and eventually fell asleep, I had to prop his head up with rolled up blankets. It really was so upright and felt like vinyl.

2) The cabin crew are only rarely asked to install them and it takes them a while to get it right. There is some weird metal base that needs to be attached before the seat does. And it took 3 crew members quite a while to figure it out.

3) You are forced to gate check your car seat and it's very unsafe to do so. I wrapped mine in blankets and coats before putting it in a bag, but I knew I would never know what happened to it. Airport staff are notorious for dropping and throwing car seats. When I landed back in the States, I was *so* mad because instead of the car seat and stroller waiting for me at the gate, they threw them with the rest of the baggage and it was all the way on the carrousel


Here are some pictures, sorry they are blurry. On the return flight we knew what slot he needed so told the crew member and she adjusted it. They can not be adjusted after the seat is installed. 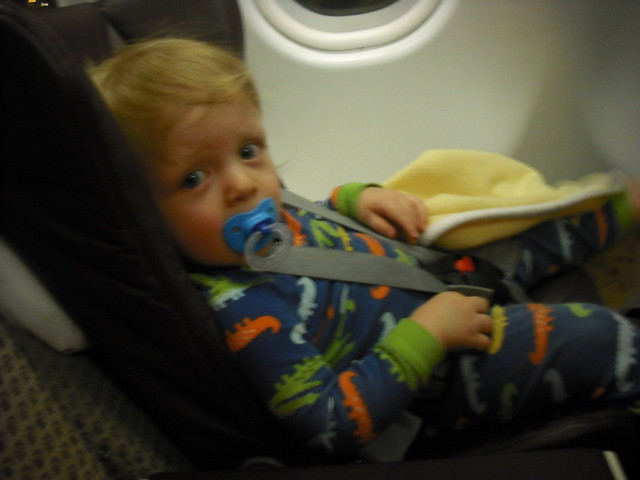 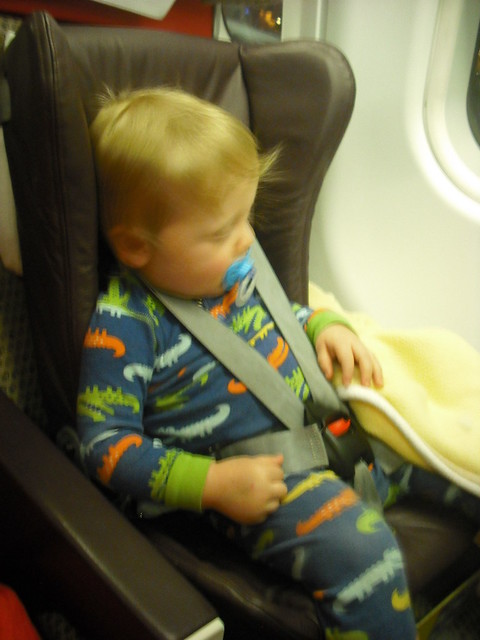 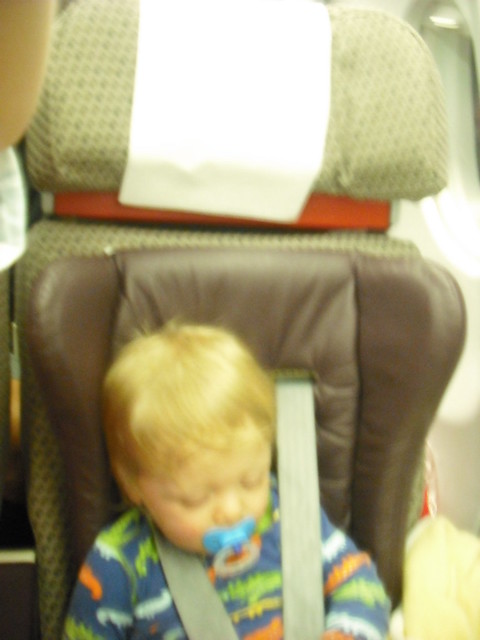 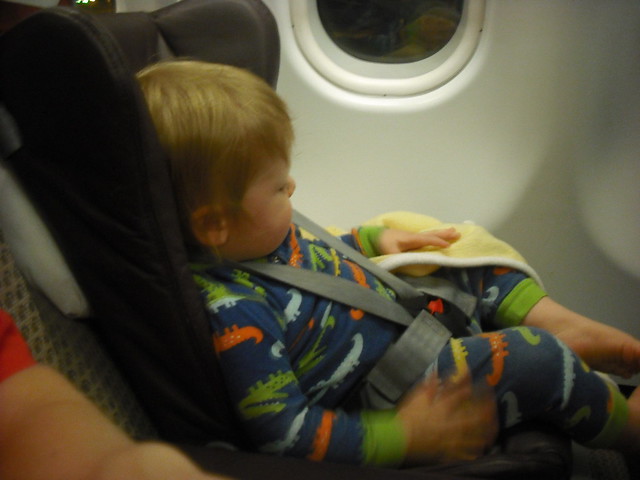 We are going next spring to the UK with a 4 year old and 2 year old and will probably be using American Airlines.

Staff member
Oh, that poor thing! He looks so uncomfortable and those seats don't look like they could NOT be uncomfortable.

That seat is horrible! Poor baby. He does look super uncomfortable. Why won't they let you use your own seat? What a stupid policy.
E

Thanks everyone!! I've been consulting Google and read that its pretty much a hate-hate relationship most people have with this seat. Kiddos seem to hate it as well. I also saw that sometimes it ends up not on the plane even after being reserved, in that case I have no clue how to fit DD into the seat without any car seat. At 17.5lbs, is it safe if they forget my reserved seat to have her in her own seat without a car seat just seatbelt?

ElmoMinnieMunoFoofa said:
Thanks everyone!! I've been consulting Google and read that its pretty much a hate-hate relationship most people have with this seat. Kiddos seem to hate it as well. I also saw that sometimes it ends up not on the plane even after being reserved, in that case I have no clue how to fit DD into the seat without any car seat. At 17.5lbs, is it safe if they forget my reserved seat to have her in her own seat without a car seat just seatbelt?
Click to expand...

I would make sure you have their seat before you check yours. When flying with my sister in the 90's we planned to lap hold her at 20 pounds and about 18 months but when we bored, after checking her car seat, we had an empty seat so she sat on it and it was a horrible 2 hrs. I do not reccomend this at all.

ElmoMinnieMunoFoofa said:
Thanks everyone!! I've been consulting Google and read that its pretty much a hate-hate relationship most people have with this seat. Kiddos seem to hate it as well. I also saw that sometimes it ends up not on the plane even after being reserved, in that case I have no clue how to fit DD into the seat without any car seat. At 17.5lbs, is it safe if they forget my reserved seat to have her in her own seat without a car seat just seatbelt?
Click to expand...

Have you booked the flights with Virgin?

If not, I wouldn't even go there. Just write off Virgin for the time being and look at other airlines. Otherwise your options are 1) have your baby be very uncomfortable the whole flight in a horrible seat while your car seat is in danger being handled outside the plane. Or 2) you get there and there is no seat and your poor baby has to sit in a seat belt (which is totally not doable or safe in any way). It's not worth it, believe me! If you're going to pay for a seat for your sweetie (kudos to you for doing that!) then why not be able to use it properly, with your own car seat that your baby is comfortable with?
U

I booked a child care chair for my 8.5 month old on a Virgin Atlantic red eye flight from ATL to LHR. The chair was already installed when I got on the plane but I had brought his usual carseat with me as well. When I saw that the Child Care Chair was positioned forward-facing, I requested that it be removed so that I could just use his car seat. The flight attendant was very helpful, removed it promptly, and asked if I needed any assistance installing his seat (a Chicco Keyfit 30). She also asked to check the seat to see if it was approved for use on aircraft. I was expecting this question, so I knew where that sticker was on the carseat and pointed it out to her (you can find images of the approved stickers on Virgin's site here: http://www.virgin-atlantic.com/gb/en/travel-information/flying-with-children/children.html ).