Tell me about your Kia Sedona

We are looking at getting one, tell me what you love about and what you hate about it. Also any other important info like the year and what not. TIA!

We have a 2008 Sedona and love it. It is sturdy and much more child friendly and roomy than our old Olds Silhouette. We have stow in go seats in the 3rd row with one complete LATCH plus one top anchor. Both captain's chairs have full LATCH. I like that it does not have a lot of bells and whistles. The electric door and rear vent windows broke on our old van and I'd rather have manual than broken that don't work at all (windows) or take super strength to open (door). The kids can easily work all the doors and windows in the new van.

I love that it is reliable and cost much less than a Toyota or Honda van. I love that it is red. It has cup holders galore and plenty of storage spaces. There is a cubby in the back where I store the dog's harness when she isn't with us and there are two glove boxes.

The only thing I don't like is that a center bench is not an option. You have to have captain's chairs and they don't slide to the center so access to the 3rd row can be difficult. The captain's chairs do flip forward if you don't have a car seat installed however. If a bench seat in the second row had been an option, I would have looked high and low for a van with that option.

We bought ours used, it had been a rental vehicle and had about 24,000 miles on it. We did purchase the extended warranty because we keep cars for just about forever.
M

I have an 04 and it's just so-so. It was re-designed in 06 and they are completely different vans now.

The older generation had some reliability issues. Mine has 45k miles now and it's had a lot of things break that I'd consider quality issues. Things like the hatch handle, trim pieces on the seats, the holder for the gas cap. It was probably in the shop 20 times in the first two years I had it. I bought it 6 mo old with abt 8k miles. I haven't had good luck with the Kia dealerships customer service. From what I've researched, the older generation also has break issues. Basically the brakes aren't big enough for the size of the vehicle. I didn't have a problem for the first couple of years because we were only driving on flat areas. When we started going to the mountains frequently it became noticeable. It is a long steep climb/decent but I've taken several vehicles up it and never had brake issues except for this van. My Sedona has had 2 sets of rotors warp and I think the ones on now are a bit warped. At the first brake issue, we found out the brake pads had been replaced before I bought it. This would've happened sometime before 8k miles.

The Kias are nice is you are buying used. They don't hold their resale well. When I bought mine we would've paid about $3k more for an older Honda or Toyota with 60k miles. My van has definitely been frustrating over the years, but overall considering what I paid for it I'm still ok with it.

Mine has bench 2nd row with full LATCH there. It has 1 top tether anchor 3rd row passenger's side. LATCH installs have been very easy. Seatbelt installs have been fine too. I've had these seats in there: Installing with LATCH: 2nd row: RF Marathon, Roundabout, FF Marathon, Frontier. Seatbelt installs: 2nd row Frontier LBP, 3rd row middle RF Marathon, 3rd row outboard FF Marathon, Frontier. I've had some problems getting a Radian in the third row FF but I was short on time. Another poster couldn't get it installed.

Like I said-the 06 and newer vans are a completely different animal. If I was going to buy a used van right now I'd consider the newer Kias even with the issues I've had.
G

I LOVE MY VAN!

Seat installs are a breeze, the 3rd row is wide for many 3 across combos.

It's nice to hear great reviews. We are looking into getting a newer van in the fall and the Sedona has been top on our list with the Odyssey a close 2nd. Of course the Sedona is about 1/2 the price so I have a feeling that is what we will be going with.

Do they fit Radian's well?? I can't believe I'm actually planning a car around my car seat but I terrified of getting something that I can't install my Radian very upright in. lol

I have never owned one but wanted to second the 06 or newer recommendation. My friend has an 05 and it has had one problem after the other. And oddly enough, nothing has been covered under that awesome warranty they pushed. Customer service at the Kia dealership has been way less than stellar as well.

I've had great luck with my 06 Sedona (had it a year) Very reliable, car seat friendly and great to drive. The 3rd row has 2 sets of latch & 2 tethers which was the selling point for me over the Grand Caravan. The only thing I liked better about the Grand Caravan was the stow and go seating & how upright I could get my Radians
Here are 2 Radians in the captains seats & a CA and a MyRide in the 3rd row: 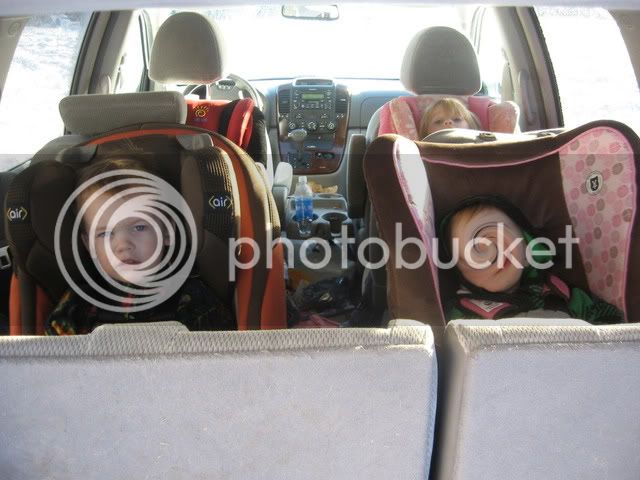 firemomof3 said:
I've had great luck with my 06 Sedona (had it a year) Very reliable, car seat friendly and great to drive. The 3rd row has 2 sets of latch & 2 tethers which was the selling point for me over the Grand Caravan. The only thing I liked better about the Grand Caravan was the stow and go seating & how upright I could get my Radians
Click to expand...

How upright could you get the Radians? I could install her in the 3rd row if it made a difference, I have 2 booster riders, a Nautilus rider and Lizzie RF'ing in a Radian. 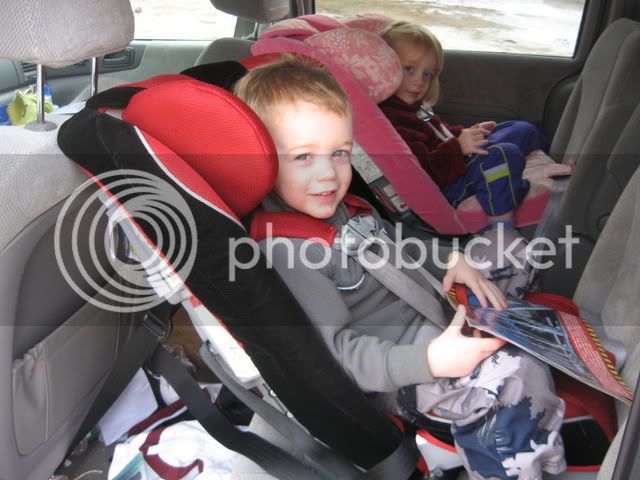 How my van is usually set up: 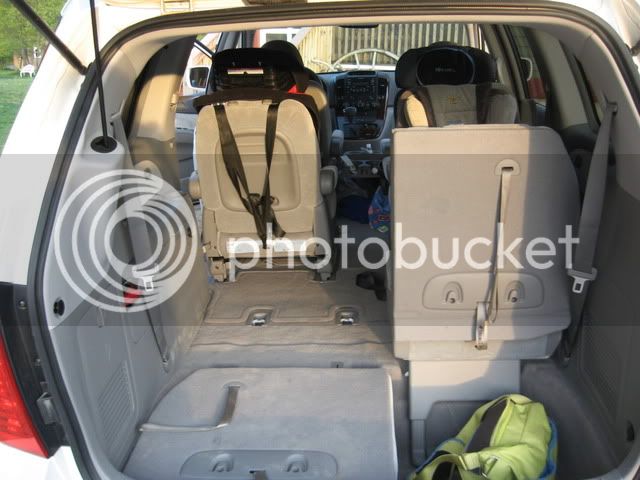 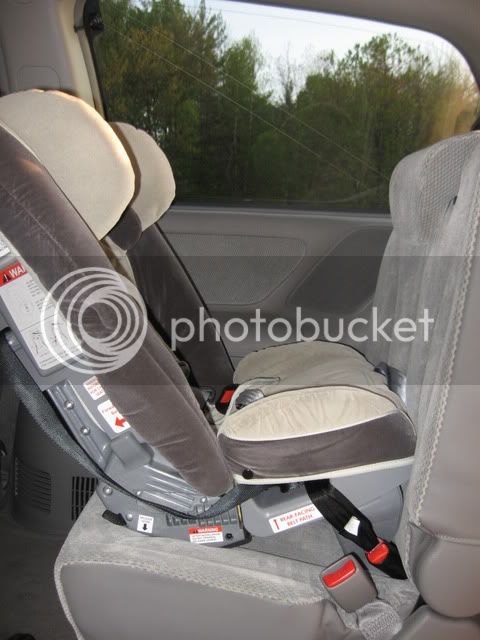 I have had no problems with our Kia service. They get back to me very quickly if I have questions and you can schedule appointments online with no hassles. I did have a long wait one time because they were short handed after having one person call in and another go home sick, this was at the height of swine flu here. They told me upfront that it would take longer than expected and they even offered to provide a borrowed car for me to use, even though I hadn't asked for one when I scheduled.

The only time I've used the warranty so far was for when the engine light came on. It was the O2 sensor and they fixed it for free. Everything else to this point has been maintenance, which we have to pay for, of course.
L

Just a question from following this thread..... I noticed the previous poster refer to "how upright" she could get her carseats. Is "more upright" better/safter than more of an angle? Does it depend on the child's age?

My DD is in a Britax Advocate, RF, 23 months old. Should she be as upright as possible? Or is some incline okay? Sorry to be a bit off topic, but I'm interested in the Sedona as well, but realized I don't know this as I was reading through......

lili said:
Just a question from following this thread..... I noticed the previous poster refer to "how upright" she could get her carseats. Is "more upright" better/safter than more of an angle? Does it depend on the child's age?

My DD is in a Britax Advocate, RF, 23 months old. Should she be as upright as possible? Or is some incline okay? Sorry to be a bit off topic, but I'm interested in the Sedona as well, but realized I don't know this as I was reading through......
Click to expand...

The Radian can be difficult to get a more upright install in some vehicles because of the design of their boot. Really it's just personal preference when a child gets older, they should be a 45 degree angle for newborns but as they get older you can have it more upright as it's usually more comfortable for older kids. I believe the max install should be about 35 degrees though