How do you buckle the middle child?
A

All FF and seatbelt installs. It actually wasn't too difficult. RA-55 puzzled great around those Radians! Not tech checked yet.

Same setup, only passenger-side Radian was a LATCH install. On first try, I couldn't get them to fit. Tried again and it worked, barely. But leg room for the Roundabout passenger is not good, and driver's side Radian rider would need to be pretty wiry to climb in and out around the Britax.
Click to expand...

Just wanted to make sure you were aware that you can't do 3 across the 3rd row of the 2009-2015 Pilot. The center/driver side seat belts overlap which is not permitted for side by side installations.

aporthole said:
Just wanted to make sure you were aware that you can't do 3 across the 3rd row of the 2009-2015 Pilot. The center/driver side seat belts overlap which is not permitted for side by side installations.
Click to expand...

Is this per the MACPS guidelines or the vehicle manual? I thought that it was only a Toyota corolla-highlander-RAV thing.

(Sorry for the chat on this thread!)
A

thepote said:
Is this per the MACPS guidelines or the vehicle manual? I thought that it was only a Toyota corolla-highlander-RAV thing.

(Sorry for the chat on this thread!)
Click to expand...

All FF, seatbelt installs, and tech-checked.
Click to expand...

***So, now time for the disclaimer: Installation of 2 seats side-by-side in the center & driver's-side positions in the 3rd row of the Pilot is not recommended per the 2015 MACPS manual because of the overlapping seat belts. Which means no 3rd-row 3-in-a-row is recommended in this vehicle. I've called Honda and they were unaware that this was an issue.

FWIW, I took at good look at our installation again and it turns out the passenger-side Radian is actually LATCH-installed, not a seatbelt install. The Radian installs very well there with LATCH.
L

bnsnyde asked me to post this since she's having trouble posting pictures. It's the 3rd row of a 2011 Odyssey, with a Harmony Youth booster, a Safety 1st Incognito, and an Evenflo Sureride.

Driver's seat moved up so it was comfortable for me to drive (5'6", but I ride farther back then most my size). Passenger seat unmoved.

Not checked by a tech, can have one do it in a few months when my sister is certified but middle and driver side didn't actually even touch at all. Don't even ask me how you'd actually buckle the center one though. Just did this to see if it could be done, since I was installing 2 of them in there anyway.

Infant seat installed with center lap belt, required two twists of the buckle stalk to keep the buckle out of the belt path to tighten enough.

Literider only works with a smaller booster rider because of the low fixed headrests. Mom is moving the child (age 7, 65lbs) to an Incognito to bring him down a little more. 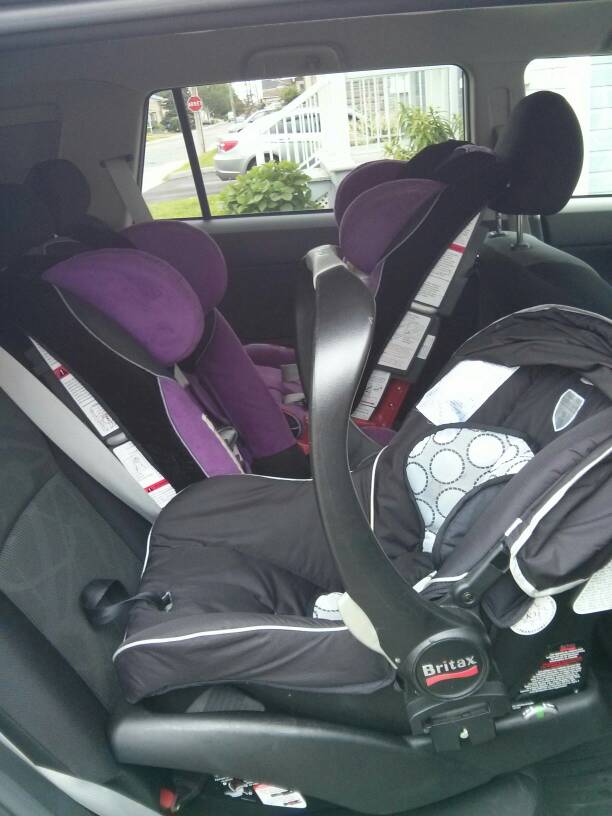 Okay, I did it! I'll update with pictures later:

There is not a fraction of space to spare, and it was super annoying to install them in this heat, but it seems to work. I have NOT had this checked yet, but all seats are independently tight and move 1" or less at the belt path.

The biggest issue is the contours of the vehicle seat backs and the curve at the door sides of the seat cushion. I'll post pictures to show, but basically there are several inches of vehicle width that you can't even use because of these contours! With the infant seat base, if I scoot it toward the door any more, the base corner overhangs the vehicle seat where it curves in. I know some overhang is okay, but this is too much - it makes the installation unstable. With the Radian RF, the "foot" that goes on the bottom has to go between the seat back and cushion. Well, the side contours by the door are hard, not foam, and I can't get the foot between them. So it's definitely annoying! The back seat of the vehicle is actually wider than the usable space for car seats. I imagine this is not uncommon, though.

But anyway, it looks like I can put off buying a van for at least a year. My wallet just gave a little sigh of relief.
U

The seats puzzle nicely, the Pipa's handle clears the Frontier's arm rest by a hair. I love the click tight install of the Frontier but at 19" it is a tad wide for 3 across. The seats are all independently tight seatbelt installs, which is very challenging in the Equinox. The Equinox has the belt buckles forward of the seat bight so learning to twist down the buckle stalks has been a life saver!!
There is 3 full sets of LATCH but with the 60/40 seat split you can only use a max of two Latch sets at a time as per the manual. The middle and behind the driver LATCH sets cross over each other. The seat behind the driver is the hardest location to do a successful seat belt install, I can not get the Radian installed there with a seat belt it slides freely back and forth. The side seat belts bolt into the floor, which makes it harder to get the belt really tight (so wide!)
All 3 seats almost touch each other, they are very close! The side seats clear the inside of the door frame nicely too.
I cannot see the child in the Radian using the rear facing mirror with the angle adjuster and head rest of the Radian the way that it is.
Planning to use this configuration at the beginning of next year, kids will be: almost 2 - Radian, 5 - Frontier, Newborn - Nuna.
I'm happy that I can use the seats I already have! I do not think 3 will fit in DHs 07 Mazda3 but we both plan to have different cars in a few years anyhow
He has a Britax Boulevard G4 (no click tight) RF and an Evenflo Symphony 65 FF, both big wide seats!
Posted via Mobile Device
Posted via Mobile Device
Posted via Mobile Device
Posted via Mobile Device
Posted via Mobile Device

2014 Honda Accord. Passenger side: Clek Fllo; center: Diono RXT; driver side: Diono RXT. RF with ARB, RF with AA and tethered to inside leg of driver's seat, FF. All seat belt installs.

The two Radians snuggle right up to each other; there is a small bit of space between the RF RXT and the Fllo. The center RXT is slightly tilted from being off center on the seat hump and the locking seat belt install. (Sure wish it had lock offs!)

Driver to passenger, all seatbelt install

Not checked by a tech. Before we had the Evenflo Securekid harnessed booster we had a Diono Radian R120 successfully installed driver side second row both RF and then FF with LATCH.