Staff member
Many of you have probably already heard of the Safety 1st Incognito . It's a new product, ideal for kids around 8-years and older, who aren't yet ready to sit without a booster because they aren't tall enough to pass the 5-step test . It comes in 4 colors designed to match vehicle interiors and be as unobtrusive as possible. It's relatively thin and doesn't have tall armrests, making it look like little more than a seat cushion! That's great for older kids who don't want to be seen in what their friends may perceive as a little kids' booster! (Light Gray, Tan and Black shown below are available for pre-order due to ship in November for $19.99 at Amazon.com, Charcoal is coming soon). 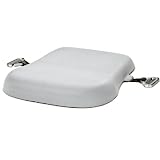 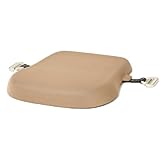 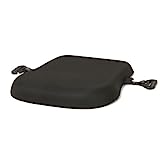 
The Incognito is rated for kids 6-years old and up, between 60 to 120 pounds and for kids 47-60" in height, as long as they have adequate whiplash protection from the vehicle head restraint. These limits are set not only to promote this product for older kids, but also to discourage younger kids from using it. Since it's relatively thin, it may help taller kids compared to a typical booster, since their heads are less likely to come above a shorter vehicle head restraint. Built-in lap belt guides help position the lap belt correctly. The Incognito lacks a shoulder belt adjustment, but older, taller kids in this range probably don't need this feature. On the other hand, shorter or younger kids closer to 4-6 years old will probably need such an adjuster in most vehicle seats. So, a high back booster is likely to be a better choice for younger kids, or in vehicles lacking adequate head restraint.

The focus of this review is a benefit not yet widely recognized, apparently not even by Safety 1st, based on my recent discussions. This product has a nice practical advantage in the third row seats of almost every compact and midsize SUV, and even some full size SUVs. Most of these third row sport utility vehicle seats are relatively low to the floor and have limited leg room, compared to typical second row seats or the taller third row seats in minivans. That means that for many kids around 8 years and older, even if they have enough leg room back there and happen to pass the 5-step test without a booster, they probably have no thigh support at all. Because of the low vehicle seats, even taller kids and tweens have their knees well above the seat cushion. That can make it uncomfortable on longer trips.

Enter the Safety 1st Incognito Belt Positioning Cushion. It's not only perfect for these older kids because it doesn't look like a regular kid booster seat, but it is also relatively deep and has increased thickness at the knee. That means it can help provide increased thigh support in third row seats, while positioning the lap belt correctly and reducing the risk of submarining under the lap belt in a crash.

The photos below are of my 8-year old son, who is almost 54" tall and just above 65 pounds. You can see how much better the thigh support is with the Incognito, despite its thin profile. Though the belt fit is better than with no booster and is an acceptable fit overall, I found that some standard boosters provided somewhat better belt fit in the third row of my 2011 Toyota Highlander.

It's now my son's favorite belt positioning carseat, mostly due to the stealthy design. The lap belt guides are easier for him to use than those on the competitive BubbleBum booster. He also says it doesn't seem as soft as the BubbleBum and some other boosters, but added that it is, "Cushy enough." In fact, the entire seat is made of a firm cushioning material. It's probably average in bum comfort compared to most boosters. Better than some that have little padding above their hard plastic shell, but not as comfy as other designs that have generous padding.

Plus, many of those third row seats in SUVs not only lack thigh support, but are also relatively firm because of the compromises made to the seat cushion due to the flat-folding feature. In some vehicle third row seats, the Incognito is going to add comfort in long trips for both overall cushioning and for thigh support compared to using no booster at all. This may even help kids who can pass the 5-step test and don't technically need the Incognito for safety.

I like that it's lightweight, can easily match the vehicle interior, is easy for him to use without my help and, unlike most inexpensive booster seats, it's made in the USA! Best of all, I like that (so far) it hasn't been a challenge to get him to use it, even though most of his friends are no longer in any type of booster seat!

If you haven't seen it already, please be sure to check out our full review at CarseatBlog! The author is an expert on using boosters. At age 11, she has at least a half-dozen years of trying almost every one that has been on the market over that time!

Thank you to Safety 1st for providing the Incognito used in this review. No other compensation was provided and all opinions are my own.

CPSDarren said:
The Incognito is rated from 60 to 120 pounds and for kids up to 57" in height, as long as they have adequate whiplash protection from the vehicle head restraint.

The manufacturer's page lists to 59" in the specs tab. What do the labels on the seat and/or box say?

Qarin said:
The manufacturer's page lists to 59" in the specs tab. What do the labels on the seat and/or box say?
Click to expand...

Whoops sorry about that! 57" was stuck in my head from something else. The label and included manual say 47-60".

Adding some comparisons to the BubbleBum inflatable booster. The comparison photo (in the first post above) is taken in the third row of a 2011 Toyota Highlander. The child is almost 8.5 years old, almost 54" tall and over 65 lbs.

Both are great travel choices because they are compact and lightweight.

But how do they fit the cat in the car?

agave said:
But how do they fit the cat in the car?
Click to expand...

You can see the comparison photos in the first post of this thread. We'll have more at CarseatBlog in an upcoming followup.
N

Admin said:
You can see the comparison photos in the first post of this thread. We'll have more at CarseatBlog in an upcoming followup.
Click to expand...

Of the kid. But not the cat.

Admin said:
You can see the comparison photos in the first post of this thread. We'll have more at CarseatBlog in an upcoming followup.
Click to expand...

I was wondering about the feline checking out the seats.