Possibly trading our poc 07 odyssey for an 08 outlook. Where do I attach the tether for a rf blvd? Most likely passenger side (unless I can fit it middle with a booster or fr85 on other side).

Eta..
Also, I think dd7 has outgrown the harness (wears size 10 shirt). I tried one of our fr85s as a booster in it, and it's a beast. It actually fit her well since she is over 60lbs, not scrawny. Any booster suggestions for the outlook? She also rides regularly in an acadia so I'll need some regardless of if we switch vehicles
.
Last edited: Dec 2, 2014

Passenger side is easier than Driver's side. Our Outlook is 2007 but I can't imagine they changed between the 1st & 2nd year the vehicle was made...

For the passenger side around the inside track worked. It's around the bolt/leg connecting the track to the floor: 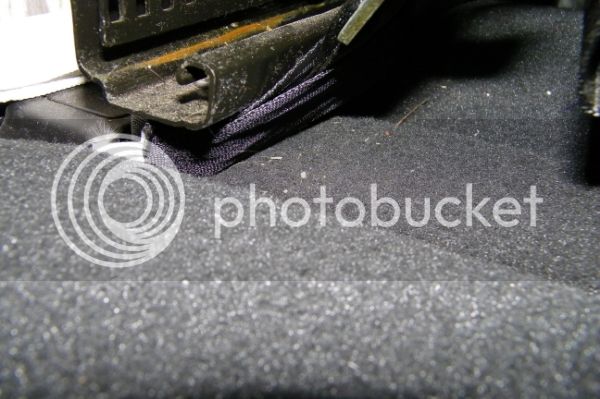 On the driver's side the outside seat track worked but it was very difficult. I wedged the tether between the plastic part (couldn't find a way to remove it) and the track to get it around the track. We never had a problem with the seat position but when I took the car into the shop they always put the seat all the way back and jammed it against the tether strap (and the seat if it was installed also). I think by that point DD was FF and I just left the tether there so if I moved DS's seat to that spot there was a tether there. (the white string is there to help show where I fed the tether). 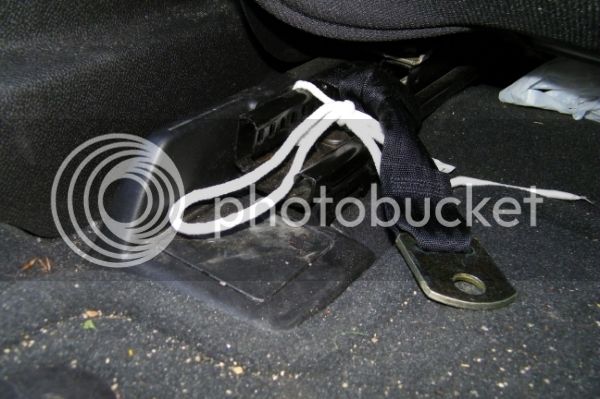 ETA - for boosters (my kids are 7 and almost 9 now) DD had the PWSGL (using it backless now) and DS uses the Recaro Performance booster. The performance booster is a little tricky to buckle because it's so wide, DS figured out how to scoot it over when needed so he could buckle. For both of those I removed the headrest to get the boosters to sit flush against the back. The headrests are clipped in so it's a little tricky to remove and they don't click in if you need to put an adult back in the spot unless you put the clip back on (which I haven't done but I should for DD's seat since she's in a NBB now).

wnkw said:
I read that the seats need to be reclined. What about with my older dd's booster? Is it ok for the vehicle seat to be reclined?
Click to expand...

I think the recline note is mainly to make it easier to access the latch anchors (it's been a while since I've looked at the manual). I do remember now that it took a little more adjustments of the seat (forward/backward and recline angle) to get the belt to retract properly with the PWSGL, it was the original version so the newer version might be better. No problems at all with the belt for the Performance Booster.

aeormsby said:
I think the recline note is mainly to make it easier to access the latch anchors (it's been a while since I've looked at the manual). I do remember now that it took a little more adjustments of the seat (forward/backward and recline angle) to get the belt to retract properly with the PWSGL, it was the original version so the newer version might be better. No problems at all with the belt for the Performance Booster.
Click to expand...

I was looking at that booster. Does it fit well? The fr85 is crammed against the buckle. I know dd would not be able to buckle it, and if she grows the smallest bit she will have to be in a booster.

The Performance booster is easier to buckle than the Frontier (ours is the 80) as a booster. It can be tight on the buckle but scooting it a little (which DS can do on his own now) and rotating the buckle forward help. I think it took DS about 6 months to figure out how to do it on his own, he was just turned 6 and much smaller than your DD when we got the booster though. My DD is probably about the same size as your DD, I can have her sit in it when we go to school this morning and snap a pic.

First photo is the performance booster, it's on setting 9 of 11 (DS uses setting 7). Second is the backless PWSGL.

First photo is the performance booster, it's on setting 9 of 11 (DS uses setting 7). Second is the backless PWSGL.
Click to expand...

Hard to say how much growing room between notches. 2 notches might be about 1.5 inches. I love the booster but it doesn't convert to a backless so that might help you make the decision.

Latest member
Will and Emma's Mom