Thanks so much for your Very informative post and visual picture of the Diono car set installed in a 2-door civic. We are actually in the process of switching our LO from his infant car seat to a convertible and having a hard time committing to a convertible because of the fact that we have a civic SI (not planning to get a coupe/suv until we go for another child). Your post definitely confirmed it for me. I've done quite a lot of research as to which car seat convertibles are the safest and top rated and I must say, all the reviews I've read so far about the radian rxt have been phenomenal. The only set back I had was again, the fact that it may not fit for the current car we have. But from the looks of it, it does fit. =)

I have a question though, having the middle seat RF, did you have much room to spare for the front seats? Did it touch both fronts seats? I'm planning to install an angle adjuster for an extra 4" of room for the front seats but my LO is only 10 months old and the recommendation is at least a year old and are able to firmly hold their head up. Otherwise, as what I've also read from moms with 2-door cars, the front seat may just ultimately end up useless for passengers other than The spot to put diaper bag =D

This post was initially added to this thread here: http://www.car-seat.org/showthread.php?t=36831

I've separated it to it's own thread due to the age of the original thread. Hopefully you get the answer you're looking for here.
K

I haven't put one in a Civic, but a RF radian in the center of an Accord, a Prius and a Camry with the angle adjuster leaves enough room for the driver to have the seat all the way back and quite reclined: my 6'9" husband can drive and I can sit in the front seat (I'm 5'8" or so).

Center installation must be done with the seat belt in all these cars: there is no LATCH position in the center of a Civic, either.

I've done it on either side. Never in the middle yet. 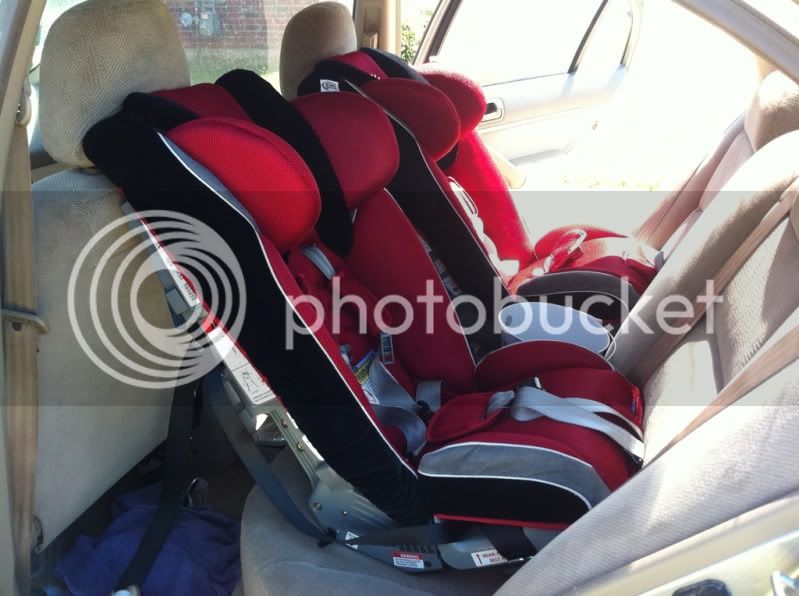