i have two kids with a third due in two months. I have a 2005 odyssey touring and I've added a 2011 seat into the 2nd row so I can use the latch for an infant seat. My older DD rides in a FR 90 in outboard 2nd row. Baby will ride in chaperone in middle plus seat with latch and younger DD is in captain 2nd row RF in Radian RXT. I like keeping all three of my kids in 2nd row for easier access and to keep 3rd row and trunk for hauling stuff.
Now starting in September I am carpooling to school (10 minutes) and will be carrying 7 year old 4 mornings a week and 3.5 year old 2 mornings a week. I would like to have them in the 3rd row but only use the 2 seat bench while leaving the 3rd seat folded down so I can haul stuff there and leave access to 3rd row since captain's chairs can't slide with car seats in them.
I tried fitting a radian 80sl in the outboard 3rd row with seatbelt install and was hoping that the graco turbo booster HBB would fit in the center position which would leave easy access to seatbelt buckle. However, the two do not puzzle well. Even if I use it as a no back booster, the arm rests are still too wide at their current height to work with the radian. The 7 year old currently uses the graco turbo booster in her parents car but I think she can do fine in a no back booster for the short ride 4 mornings a week. If I put the booster on the outboard side and the radian in the center, it works better in terms of fit, but then you can't squeeze your hand between the seats to buckle.
I thought of turning the radian RF because the back of it is wider but it won't fit RF with the bucket seat all the way back (which has to be that way because othertwise I can't get the infant seat out of the center position.
Anybody have any idea what would work better. Since it's not for my kids, I don't really want to spend much
If I can't find another solution, the only other option I came up with is to use the TB in either position in the 3rd row, remove the radian and use the rider safety vest for the 3.5 year old since it's only 2 mornings a week.
J

After doing some more searching, I'm hopeful that maybe the harmony literider would have armrests low enough to puzzle next to the radian. Any thoughts?
J

ETA: went and got the harmony literider last night and it seems to fit pretty well. Still need to try it out with a kid in it.

If you do end up with the whole bench up, Ive found easier ways to get the kids back there. If you won't have another adult up front, I slide that seat all the way up, then slide the captains chair all the way up (I am using LATCH on it). DS can squeeze to the back through the space created.

How did you get a 2011 seat to fit in the middle? Is that approved? I would love to add an 8th seat but don't see how that wide seat would fit or know for sure it's secure enough.
J

I don't have another adult in the front usually and thus do keep it all the way forward but then I keep the captain chair all the way back on the outboard side because I need the space in order to get the infant seat out of the middle position. Because I'm using the 3rd seat in the middle, the outboard captain chair is all the way tot he door and I have a FR90 with a seatbelt install so no sliding the seat and you'd have to step over the seatbelt. THere is no room to squeeze by. However, having the 3rd seat in the second row is awesome.

Adding the plus seat int he touring model of the 2005 is not approved by Honda because there is no seatbelt in the ceiling for it. However, doing some research on the honda forum shows that people have successfully fit it. The floor anchors will accommodate the seat if you push both captain chairs all the way to the outside and remove the inside armrests. The 2011 plus one seat has built in latch connectors and the seat is wider in the back compared tot he 2005-2010 plus one seat which did not have latch and doesn't require removal of arm rest. I also could not get an exact match of the leather but you can't really see the plus one seat anyway and I don't care. It works great for using latch installation and I had no trouble fitting an FR90, a chaperone and a radian in my second row. I can even fit two FR90s outboards with chaperone or radian in the center. I figure, I can get at least 4 years of use out of it until baby has reached 40 lbs. By then we may be looking at getting another car anyway. I ordered the seat on ebay. Brand new, taking out of a car that was being converted for handicapped access.

Sorry hijacking thread. So you added the plus one from the 2011+ to an older style Honda? Is this actually okay? I have a 2010 having another tether and latch would make life so much easier what did you pay for the seat? Though was yours only a seven seater? I actually have an 8seater so would even have the seat belt.
J

yes, that is correct. I have the 2005 touring model in which having the plus one seat was not an option which is why it doesn't have the seatbelt. I am not sure if the 2010 has the same floor anchors for the seat. You would have to make some comparisons. Do your captain chairs have armrests on the inside and then your plus one seat backrest is really narrow so when put in, it actually uses the armrests as part of the backrest? In theory, I would think it would work. If you measured the opening between your seat backs and also between floor anchors when captain's seats are pushed all the way out, I can compare it to the plus one seat I have.
Just wondering though. If you have a seatbelt in that location and the seat, can't you just do a seatbelt install instead of using the latch? Though having the tether and latch is nice. Not sure it's worth the cost. i think I paid $125 plus $65 shipping on ebay.

I actually removed my armrests. I would like the option to FF a seat there to me the cost would be worth it as I have 6 kids in my van almost daily. I'm going to call Honda Monday. I may even price out the whole shebang as I can't help wondering if I can just replace all seats in my middle row so I can do the wide mode thing.
J

Why would you need to replace the captain chairs? If you currently have an 8 seated, then your captain chairs should already be as far out as they can be? I'm guessing that Honda will probably tell you that you can't put the 2011 seat into the 2010 and if they are okay with it, they will charge an arm and a leg for parts.

That's not my understanding of how the seats work the base would be as far over as possible but the 2011+ seats move over essential almost touching the doors making it so you can still fit almost any seat on the plus one and still slide the other seat forward for easy access to the back. I probably wouldn't order from Honda I'm just going to make them let me try the seats out
J

After a quick google search I now know what you mean about the "wide setting" on the 2011 model. I don't think the 2010 will do that because the seat seem to be moved outward by sliding along the floor anchors and I'm pretty sure those are different between the 2010 and 2011. So the chairs are probably more or less the same but the floor anchor configuration is different. I'm guessing that mean the 2010 floor anchors would be the same for,the 2005 and 2010 models so you should be able to fit the 2011 plus seat in your car.
Here is a good pic of the floor anchors on the 2011. You can see that they are wider and allow the captain chair to move side to side. 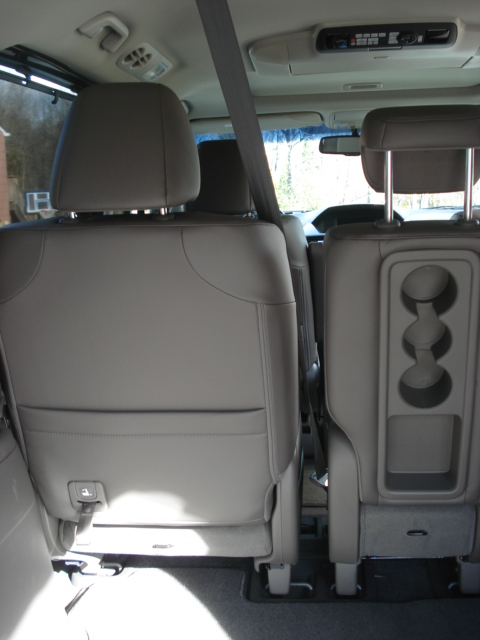 I have tried installing both a radian and a britax chaperone in the middle seat and was still ale to move the captains's chairs back and forth (assuming It's not installed with seatbelt in outboard). Also, the plus seat allows for sliding forward as well which can be really helpful when puzzling seats. What seats are you trying to fit into the 2nd row?
Share:
Facebook Twitter Reddit Pinterest Tumblr WhatsApp Email Share Link