I got a Coccoro! (pic heavy)

First, I SO did not mean to buy this seat today--I didn't think the store I was going to even had it (not listed on their website). Imagine my surprise when I walked by the car seat section and there it was! I had a coupon, so the rest, as they say, is history.

I know Darren is planning a real review, and I don't want to steal his thunder (nor do I have the energy), so I'll just post some quick photos and thoughts. (And no, playing with a new seat in the 80-degree sun while 38 weeks pregnant probably wasn't the smartest thing to do today, but I sacrifice for you people. )

First, just for comparison, here is "Baby Jess" in the SS1: 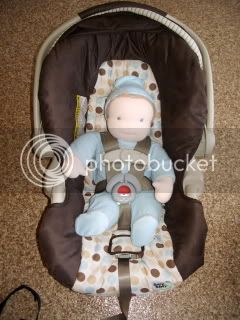 And here he is in the Coccoro, with infant padding: 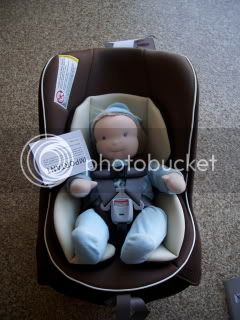 In both seats, the straps are just at his shoulders (possibly a smidge above), but the fit is nearly identical. I'd say the crotch strap is a better fit on the Coccoro, but he's not a real baby, so it's hard to say. Also, I thought for sure the shoulder pads would be too long, but they're very flexible and go over the shoulders nicely, so the chest clip wound up ok. I'd probably take them off for an infant anyway, though.

The infant padding, by the way, is quite supple. Almost ridiculous, which is probably why they want it removed after 20 lbs. In a forward-facing crash, there would be MAJOR compression. (I don't think it's as much of an issue RF.) The padding (yes, that's basically a solid wedge): 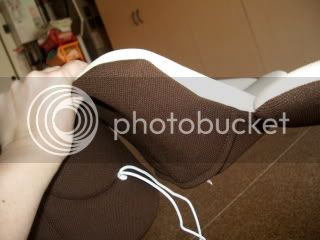 Harness height. I'm not sure if you can read it, but compressed (without infant padding), the bottom slots are about 9, top slots 15: 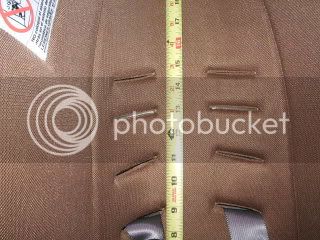 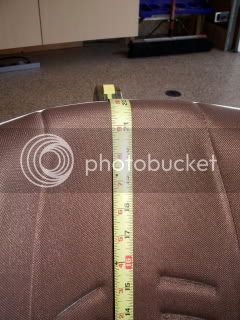 I didn't take the cover off completely, but you can see lots and lots of foam in the seat: 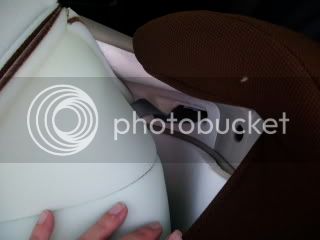 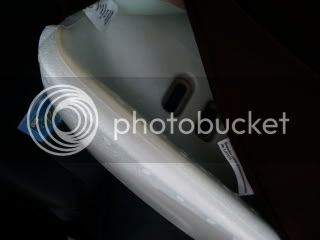 There's no real "upright" or "reclined" mode, per se--no lever or foot or anything. The bottom is very rounded, and you just sort of place it in whatever position you need: 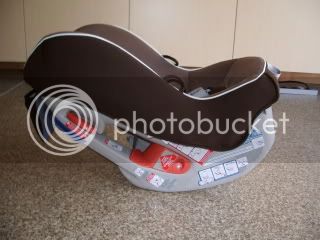 For RF, you peel back the cover (very easy--snaps and clips), put the lap portion of the belt under the "arms," then into a little path. The path seemed a bit too narrow for my seatbelt (seems sized more for the LATCH strap, which would also go through there) and caused some bunching: 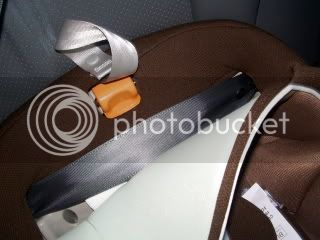 (You can see from that photo that the harness adjuster is VERY easy to get to RF--it's not buried.)

With the shoulder belt routed behind the seat: 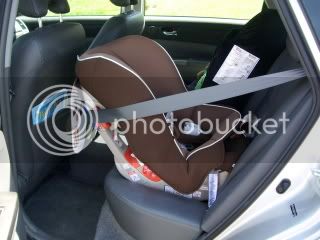 (I'm not sure how easy/difficult it would be to get a kid in with the belt routed that way. Seems like it might be easier if you have the seat in the center and can load the kid on the other side.)

According to the manual (and I've emailed to ask for clarification on this), if you have sliding latchplates--even with switchable retractors--you must use the included lockoff when installing RF. I believe that the belt guides on the back of the seat do NOT count as lockoffs, although the seat did seem extremely solid with the guides, even without locking the belt.

The lockoff is not attached to the seat (it stores in a pouch with the tether and manual), so it seems like it could get lost easily. This photo was taken in the front seat (DISCLAIMER: Never install a rear-facing seat in front of an active frontal airbag) so I could take a picture of it. In that position, it was pretty easy to use. However, in the backseat, where I'd really be using it, the locking clip was really hard to use. I have another seat in the center, and the belts overlap, so it was REALLY difficult to get my hand down in there to slide it into place, etc. I got an acceptable--but not great--install. (Honestly, the install felt more secure just using the belt guides and not locking the belt at all. But again, I don't think the guides count as lockoffs, and therefore would not be acceptable.)

Sorry for the ramble. Here's the RF lockoff: 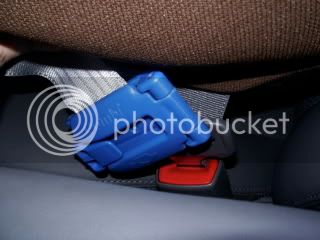 For reference, here's the SS1 installed in the car ('08 Prius). I have just enough room to slide my hand in to release the seat from the base: 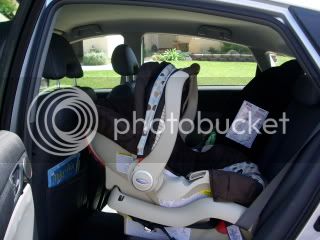 Here is Coccoro installed in the same position. There's significantly more room--enough that I can put my hand flat in between the seats: 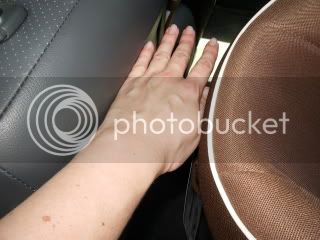 Forward-facing install went very easily. The shoulder portion must go through the lockoff, but you can lock at the retractor, too (though it's not necessary). 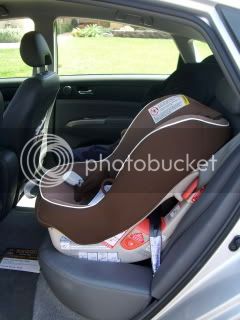 In terms of other measurements, I got 15.5 inches across at both the top and bottom, though some of that might have been extra fabric from the cover. So it might really be a little more narrow. (I think someone reported a measurement the other day.)

And although the bottom two slots are ONLY for RF, all four slots CAN be used for RF.

(Side note: I wanted the blue, lime, or orange seat. The store I went to had everything but blue, lime, and orange. So I got the chestnut. While I was at the store, I called Combi customer service to see if/when replacement covers would be available, and how much they'd cost. An ACTUAL HUMAN answered and was very nice. He said they'd have covers in about 4-6 weeks. He didn't know how much they'd cost, but he took my number and said he'd get back to me. He hasn't called back yet, but I was impressed with the service anyway.)

*drooling* I can't wait to see your actual baby in it.

How does 22" shell height compare to the RA?

crunchierthanthou said:
*drooling* I can't wait to see your actual baby in it.
Click to expand...

How does 22" shell height compare to the RA?
Click to expand...

Good question--hopefully someone can measure that.
M

Oh, SQUEEEEEEEEE! WOOK AT ITS WITTLE FACE, IT'S SO CURVY AND WEEEE!


By the way, at first read, I thought you said you had Baby Jesus strapped into the Coccoro and I thought "that's quite a trick."

This is such a CUTE seat! I wish I had a reason for one, the lime and blue are my two favorites too It will be interesting to see how it compares to the RA!

Good luck with the rest of your pregnancy!

Dude, now I want to get pregnant again just to get this seat. It's so cool looking!

I am gonna check out a few baby stores tomorrow and see if they have this seat. I dont know why I am so interested in it. I just hope I dont come home with one, DH would kill me
S

Great pics, thanks for posting!

PS LOVE baby Jess! I gotta get me a couple.

Staff member
The seat looks pretty reclined FF, is it really or was that a trick of the photograph? (We've had so many discussions about seats with FF recline lately it's got me wondering.)
A

forget the ma, i want one of these

Maedze said:
By the way, at first read, I thought you said you had Baby Jesus strapped into the Coccoro and I thought "that's quite a trick."
Click to expand...

Ok, I think I might have just had a contraction laughing at that.


ketchupqueen said:
The seat looks pretty reclined FF, is it really or was that a trick of the photograph? (We've had so many discussions about seats with FF recline lately it's got me wondering.)
Click to expand...

Ummm...hard to say. It actually seemed pretty upright to me when I put it in. Since the bottom is so round, you can probably play with it pretty easily to give it a little more/less recline. (To be honest, I only skimmed the FF section of the manual. I'm not sure if there are specific guidelines.)

Awsome review, thanks! It seems like a great solution to tiny backseats :thumbsup:

I can't find the seat online. How much does it cost?

I like the blue, lime, and orange too... altho DW would prolly force me to get the chestnut too.

christineka said:
I can't find the seat online. How much does it cost?
Click to expand...

List price is $199. It's available online at Babies R Us and Burlington Coat Factory (Baby Depot, or whatever they call it). Maybe some other places, too.

It's in-store at some speciality places.

The woman at Combi (Vera, she posted here the other day) said that it will likely be in the "mainstream" brick and mortar stores once they get the stroller for it.

LISmama810 said:
List price is $199. It's available online at Babies R Us and Burlington Coat Factory (Baby Depot, or whatever they call it). Maybe some other places, too.

It's in-store at some speciality places.
Click to expand...

so where'd you get it and how much did you pay?

oh, and it's nice to see you can reach the harness adjuster, but how does it pull?

Stupid question, I know the shoulder belt behind the seat (euro style) prevents over rotation, so what happens if you have a lap belt only? Is it less secure?

fyrfightermomma said:
Stupid question, I know the shoulder belt behind the seat (euro style) prevents over rotation, so what happens if you have a lap belt only? Is it less secure?
Click to expand...

it would probably be similar to a lower anchor installation- still passing testing but not actively preventing downward rotation.

That is one cute seat! I would love to have a reason to get one but I think K would have either outgrown it or would be very close to outgrowing it