I bought this in "Roxy" as for some reason it was $20 cheaper than the other color option "Fusion" at Babies R Us. I had played with it quickly when it originally came out and liked the idea at the time, but didn't have a "need" for it. I've been using it for a week now as my daughter's main seat on an extended trip and I really like it. Reigan is 18 months old, weighs right about 20lbs and is roughly 30" tall. She is using the top slots on it; they are about 1/2" above her shoulders, but the middle slots are about at least an inch below her shoulders and the harness was wrapping up and around her shoulders and it was difficult to adjust and was leaving marks on her shoulders.

It is installed with the base (foot is cranked out about half way) in a 2006 Ford Explorer in the passenger side, using the seatbelt. The base installed easily, and the lockoff on the base is being effectively used.

It also installed with the base (foot completely retracted) fairly easily on our flight via NWA in the coach class. The seatbelt latchplate DID end up in the beltpath and I was concerned that I was going to have problems releasing the seat from the base, as I had to push the actual infant seat into the base fairly hard to get the required "click" to sound, however, it released easily at our destination.

My DD normally rides in a RF Britax Wizard and has always been "carseat sensitive" vocally voicing her opinions if she was in a seat that she did not approve of in one shape or another, and she seems to like this seat quite a bit. It's not as restrictive in the head area as her Wizard (which has been irritating her ALOT recently) and she's been generally very happy in this seat so far.

I also like that it does adjust SO small. I wish it would have been out when she was born as I had a hard time finding a seat that fit her well as a 5lb newborn.

I have to give this seat a thumbs up for me. Easy to install, easy to use, in the typical price range, and the extended use capabilitys of it really sold me on it. I'm not even sure my DD would still fit in the Opus35 if they were still around height wise, so this has been a nice seat for her to travel with instead of lugging her Wizard around.

Glad to hear it's working out so well Sounds like I'll be able to get a lot of use out of it when Reigan is done with it, too (if Leah's anything like Bitsy, she'll be 32 inches and 20 pounds at 18 months...oh, and Bitsy fit in the Opus with growing room at 2.5 yo, just fyi, but I thought it was bulkier than the SS1...).

Thanks for the review! I tried installing the base at Lifesavers and it was amazing

It sounds really nice!
I wish this had been available before
Allie was born.
I think we're gonna need that increased weight limit
for this baby, at her Dr's appt. yesterday she weighed
in at a WHOPPING 18 POUNDS!!!
I wondered why the Snugride felt so heavy....

FWIW, I have the safeseat for my 2 month old and when I brought him home from the hospital his shoulders were just barely even with the lowest slots , maybe even a hair under them...he was 9lbs 5oz. and almost 22in long. I'm not so sure you would have gotten a good fit with a 5lb'er. He is now 25in long and 14lbs and his shoulders are now about 1/4 to 1/2 an inch above the bottom slots.
Kelley

It's a bit strange to have such a fluffy
baby this time (oooh, but the rolls are sooo
cute!)...Katie was avg. in weight but tall
so she always looked pretty thin.
Allie's the opposite...90-something% for weight,
46% for height .

How much does SS1 weigh w/o the base? The only weight I can find is a shipping weight that includes the base.. at 18 lbs.

Staff member
It weighs about 9 lbs. without the base.
T

Here's my online album of the one I got for the new baby.

Ok, I've been using this seat now since April for Reigan. I still really like this seat. I've now also installed it in my Suburban, my MIL's Lumina w/hideous forward of the bight seatbelts, my SIL's Malibu and several Escape's. I have had NO problems what-so-ever with any of the installations in any of them.

I have noticed now that the lock-off won't stay closed if you don't have some sort of webbing running through it, and when this happens it rattles around inside the base like the dickens. It's pretty annoying when that happens. Also the LATCH straps rattle around when attached to the base as well, so we have had some pretty annoying rides.

The webbing for the thigh straps does tend to get twisted over and will end up through the crotch buckle peices twisted if not careful.

The buckle is now my favorite out of all the seats I've owned. It's easy for me to release, yet my DD who has managed to figure out how to loosen her MA & WZ, and how to unbuckle her RA (old style puzzle buckle) can't release this one.

The chest clip is also very easy to use, both to clip together and to undo. (However not easy enough for Miss Houndini to undo.) 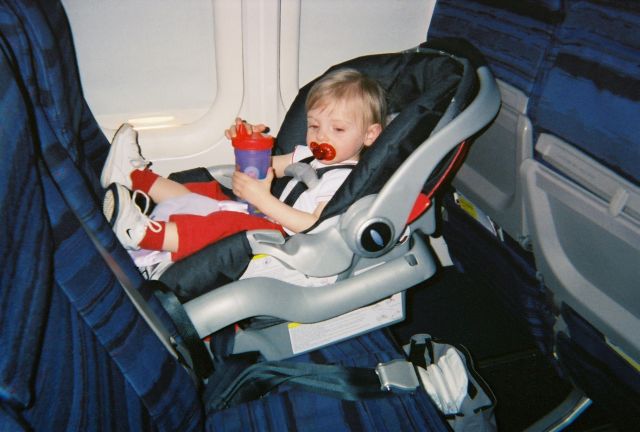 My SS1 broke - lock off popped open and wedged into carrier

My lock off was doing the same thing as Strollerfreaks (but with the webbing in it) and I noticed on mine that the carrier release was increasingly more difficult to use. Eventually the lock-off had popped open when I put the carrier in the base and got wedged into the harness adjustment button.

Once that happened the carrier became permanently stuck in the base. With the help of Graco customer service we were able to get the whole unit out of the vehicle, but there is no possible way to seperate the carrier from the base w/out damaging the unit (per Graco - DH tried and failed though) and you cannot re-install the seat. The CSR knew exactly what problem I was having when I first explained it to him, so I guess they are aware of the lock off issue.

Fortunately, Graco is making good on this and offered to replace the seat free of charge, but I had already purchased a new seat. They are sending me a full refund upon receipt of the faulty unit.

I just got my Graco SafeSeat1 a few weeks ago, and practiced installing it yesterday with the seat belt. (lap only, and with shoulder).

I must say, this was the EASIEST infant seat I have installed with seatbelt. I was quite impressed on how good it installed in our car.

We have a 97' Chrysler town and country.

I recently purchased this car seat for my 7 month old after trying a Infant to Toddler Carseat by Safety 1st. I had another infant carseat that went to 20lbs but she outgrew that one. But I didn't like the Safety 1st Car Seat at all, it would not securely face backward no matter what I did, so I got rid of it. Then I found this SafeSeat at Sears and was so pleased to see the weight goes till 30lbs and the Height has improved as well. I live in Saskatchewan and its Really Cold in the winter so I love the idea of putting her in the carseat inside the house then putting her in the car. I feel much safer having my daughter in one of these, rather than a carseat that doesn't lock tight at all facing the rear. Then by the time she is ready for a toddler seat my 3 1/2 year old will have moved to a booster seat. I give this carseat two thumbs up!!
Share:
Facebook Twitter Reddit Pinterest Tumblr WhatsApp Email Share Link