Flying with a Boulevard (and need flying tips!)

Can someone remind me how the buckle needs to be run through the set if it is rear facing so that I can later undo the buckle? I know there is a way to do it and if you do not do it that way, it is next to impossible to loosen later on.

I have a Traveling Toddler that I need to practice on putting on tonight. Trip is on Saturday.

Also, sort of off-topic but I would appreciate ANY tips on how to approach the food issue with my 2 year old. And any flying tips in general! I have to bring mostly finger food as she just won't let me feed her so they have to be DIYS type foods.

So far, I have raisins, cheese sticks, crackers, fruit rolls, soy milk, juice (that I will mix with water). I am thinking of putting a banana in a tupperware container since I can slice it with the skin on and she can peal them to eat. Oh, I can bring an apple, too to slice. IT all seems too sugary though and the last thing I want is her amped up.

I want to bring her some yogurt even though I will have feed it to her but I don't know if it's worth the hassle.

Can I bring a freezer pack to keep the cheese and yogurt cold?

I will need food too so thinking of making a pasta salad with veggies in it and light oil so it' won't be too messy for her to eat with.

What about any kind of tray for her? Maybe just get a regular tray that she can put on her lap? I saw one kids tray specifically for car seats but I think it was too pricey.

Staff member
Rear facing is easy. Just put the seatbelt over the cover and buckle it. Forward facing is when you need an extender or to flip the buckle.

As for food, how long is your trip????? I didn't bring that much to go to China from the east coast. And I didn't stress about it that much. LOL They do sell food in the airport, and it's well worth it to me to buy there and not have to worry about freezing or packing or carrying it. You can buy a banana there. Buy an apple there. Buy yogurt while you're at the airport rather than on board. Many flights have snack packs if they're a long flight that you can buy that have fruit and yogurt (and chips and such) in them. I'd bring a couple of bags of goldfish and maybe a package of crackers or two. Even if you are going all the way to China. There will be some sort of food on board and some sort of food at the airport.

As for a tray, Piper never used one rear facing. She'd just set things in her lap.

I'd go to the Dollar Store and see about picking up some cheap toys that she'll like. Then you can pull them out at intervals and viola! Something to engage her for a little while.

Calm down. You're overdoing this. It's not as tough as you think it will be. Which is good, you'll be pleasantly surprised.

If the FA tell you you cannot rear face her on the plane, calmly and politely ask to see where it says it in the manual and while they're looking that up you'll set about switching her (just don't buckle it in!!). When they can't find it (assuming it's an American carrier) you can flip her back around.

Have a good flight!

I was also wondering about the length of the flight with that much food! Unless your child has specific dietary needs, no need to pack all that food! A banana, fine. A yogurt, sure (get the ones in tubes!). Some cheerios, still fine. Beyond that (and a sip cup), I'd skip all other stuff. As for yourself... go hungry. It's not worth the hassle. Eat before you go, grab a bag of chips, and be done.

i dont think you can bring yogurt past security i thnk u can only bring less then 3oz of liquid or something...have a great trip try not to stress to much!

so now how do you get a belt extender to forward face?
N

Well, we will be leaving the house at about 5:30 our time on the West coast and arrive on the east coast east coast time at about 9:30 pm. There is a flight change but it's only about 45 minutes. I have no idea how far it is between planes. I have no idea if it will be where there is food. I will be having to deal with DD who will probably want to run around while trying to pack everything up (seat on suitcase) and make it to the next flight.

I have no idea what food is at the airport at our end since I am leaving from a terminal I have never flown from. Maybe I will see if there is anything online about this particular terminal.

So total travel time is going to be about 12 hours or so. that's a long time and I think DD will need more than gold fish.
N

wendytthomas said:
Rear facing is easy. Just put the seatbelt over the cover and buckle it.
Click to expand...

Eek, what do you mean over the cover?! I have to still read my car seat manual for buckling as I use the LATCH. Doesn't the buckle just feed through the back of the seat where the slots are?!
N

stephie1012 said:
i dont think you can bring yogurt past security i thnk u can only bring less then 3oz of liquid or something...have a great trip try not to stress to much!
Click to expand...

The way I read it, you can bring in more than 3 oz of liquids for food for kids:

For rf the belt goes under their legs. There is slots in the fabric where you can bring the belt over the fabric it will be under the legs when baby is in seat. It will be fine.

NatNatsMom said:
Eek, what do you mean over the cover?! I have to still read my car seat manual for buckling as I use the LATCH. Doesn't the buckle just feed through the back of the seat where the slots are?!
Click to expand...

Forward facing you use a belt extender by shortening the plane's belt all the way, then using the extender through the forward facing belt path so the buckle is out on the other side, rather than buried in the back.

I still don't bring much food with me, even flying coast to coast. If there isn't time to stop in the airport then there's food on board to buy. and at 5:30 there's usually a starbucks open. But if you want to bring that much, go for it. Most of us just think that much is too much and a hassle for ourselves.

It's really not that much food. *lol* the Juice and soy milk are just in those little 3 or 4 ounce boxes. I am going to take only one of each. The raisons are those little raison boxes. the small, snack size ones. The fruit roles are individually wrapped fruit packs that are small. These are all snack sized items... not the full sized. No different really than bringing a bag of gold fish which my daughter doesn't like.

I think I need to get out the manual tonight or look at it online. I did down load it recently. as I am not clear on the rear-facing instructions. I think once I see it in a diagram, it will make sense. I think tonight I am going to practice it on our car, too.

I have flown many times with my kids, and never feed dairy or chilled snacks in a plane - too messy and too much hassle. Crackers, milk in a sippy, raisins, etc., work great. There is almost always food available in airports when waiting for a plane - we try to eat then and between flights. My little ones usually have long naps on the plane. Bring books & other quiet activities, too.:thumbsup:

Staff member
It's not the best picture, but practicing in your car will help. Don't be surprised if you get to the end and you go, "That's it?" It's really really easy to install them rear facing on a plane. Oh. Put the armrest up.

The buckle will end up under one of her thighs. I just put a blanket over that so her leg wasn't resting right on the buckle. AND--you want to make sure that you buckle it in the seat area and not on the side of the seat. You want it where the buckle is under her leg. Otherwise you will never get that dang thing back out. I speak from experience. It is super easy, though....just thread it through over the cover, tighten and go! It may be a little more upright than she is used to but it all depends on the actual plane and space available.

For food you'll be fine! Just don't stress too much and it will go smoothly. I brought a few new books and that helped. I also bought one of those color wonder coloring books (from the airport....it only had one marker so it was great)...THAT was a hit!! In fact I bought one again at the airport for the flight home!

Last time I flew, I packed a snack box for him. It is all in 1 snapware container and I gave it to him to hold in his lap. He didn't need a tray. 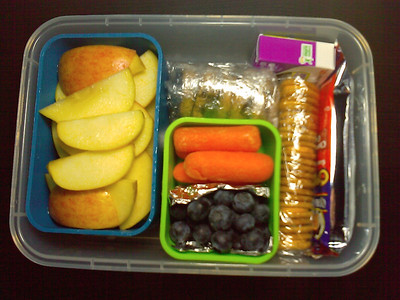