Hi, I have a 2004 Volvo S60, and wonder what car seats will fit both rear- and forward-facing into this car? I have the Graco Snugride 32 and it fits well, although the front passenger side seat is pushed up a bit, and I don't want to have to push it forward much further. I believe it only has LATCH on the sides and not the middle. Thank you!!!

You are right that it only has LATCH on the sides and not in the middle.

How old is the kiddo who you are looking for a convertible for? How much does the kiddo weigh? Are there any other kids/carseats in the car? That can help us give better recommendations for your situation.

Other seats to look at might be the Evenflo Triumph 65, the Evenflo Momentum, and the Maxi Cosi Pria 70. I haven't tried any of these seats, but they do have the reputation for installing fairly upright/taking up little room from front-to-back. I have installed a Radian rear-facing in my S80, but it might be a little too big front-to-back to deal with in an S60. Diono (formerly Sunshine Kids) is supposed to be releasing a wedge to go under the Radian to help it install more upright, so it might still be an option.

My kids are both currently in a Britax Frontier 85 in my Volvo, which works nicely as a forward-facing seat, because the headwings sort of go around the headrest. You can see where the pink arrow is on the picture below how the shell of the seat fits below the Volvo headrest (it's an old-style Frontier in the picture, but the Frontier 85 fits very similarly). 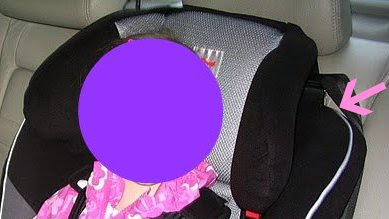 I agree age/stats of child matter. I will second I'm not a huge fan of TRue Fit rearfacing. It was ok as young infant but with toddler and headrest etc...wasn't fun in my S60. Once I upgraded to an SUV, still not a fan of RF truefit!

I have used Marathon successfully, even happily, as RF seat in S60.