Arms getting stuck in CCO loops

Has anyone had problems with their child's arms getting stuck in the CCO loops? (There are fabric loops that can be used to hold the harness out of the way while getting a child in/out of the seat.)

DD2 has done it once or twice in the past, and now several times this week. On the way home today, she got both arms stuck in the loops! Of course, since she's RF, I can't see that she's stuck until I open the door to get her out of the seat. And she fusses in the car half the time anyway , so there's no way for me to know when she's just fussing and when she's complaining because she's stuck. (She doesn't really talk much yet, either, so she can't tell me she's stuck.)

She hasn't been hurt, and I supposed I could just cut the loops off, but I'd rather keep the "harness out of the way" option. Has anyone called Combi about this? Do their redesigned covers have a different style loop?

I don't think DS knows those loops are there. I have never seen him mess with them but then again, the CCO is in my car and I am the one driving most of the time so I can't see him. It never even occurred to me that they could get their arms in there, I thought the loops would be too small for that.

monica-m said:
It never even occurred to me that they could get their arms in there, I thought the loops would be too small for that.
Click to expand...

Definitely not too small. 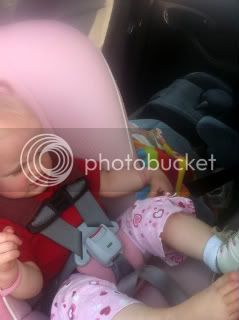 I can just imagine someone next to you at a light thinking you have her restrained like that for some reason she doesnt look happy about it, youd think shed stop doin it if it wasnt fun?
N

Someone else posted about this awhile back, though I can't remember if it was the baby's arm or leg getting stuck.

We haven't had that issue, at least not yet.
N

Here is the thread I was thinking of.

It was the leg getting stuck.

ETA: now re reading hat I remembered that dd did get her hand in the loop one time and she couldn't get it out, but it wasn't twisted or anything, she just couldn't figure out how to pull her hand out. I had forgotten all about that.

Sent from my iPhone using Car-Seat.Org
A

Safety pin it to the side of the seat, where she won't be able to reach it?

AnnaC said:
Safety pin it to the side of the seat, where she won't be able to reach it?
Click to expand...

That would work, but then I wouldn't be able to use the loops to hole the harness back while I get DD2 in/out of the seat.

I was hoping someone here with the same problem had called Combi about it. Guess not.

DD got her hands stuck a couple times. I mentioned it to Vera at Lifesavers and she hadn't heard of it but could understand how it could be an issue.

I told her that I (and others I know--based on a previous discussion here) don't even use the loops to hold the straps. (I only use them as toy rings ) I suggested they do away with them all together.