For Sale Any interest in some recent Playmobil??

The boys received some Playmobil sets from DH and I at christmas, but neither of them care to play with them as they much prefer their Lego's. In the large sets I have the Playmobil Family Camper, Playmobil Animal Clinic, and Playmobil Ghost Pirate Ship. Smaller pieces I have are the Playmobil Animal Vet Car, Playmobil Pirate Ship Dingy along with the people. These sets are for the most part complete with the exception of the Ghost Ship which my son try to put together without my help and it never got finished because I can't figure out how to do it now. The Animal Clinic has never been assembled as I gave up on it too. Some of the hair on the men have meet the fate of a kids mouth, hence they were put up from then on, so they have teeth mark on some. I would love to sell it all together as they are light and shipping shouldn't be much.

Not really sure what to ask as I have well over $100 in this stuff.

Family Camper is all that is left.... Asking $25 shipped for that remaining set since it is missing some pieces. 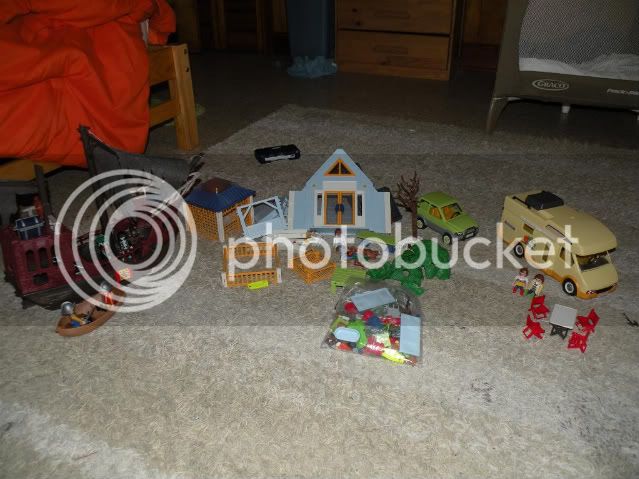 Pacey has 1 small Playmobil set that he has been playing with a lot lately. I might be interested...I would definitely like to see pictures.
A

Ok, I have some more errands to run today and when I get back this evening I will post pics. I have one PM already from someone who wants it all so if she passes then SamPacey&Joshua is next in line then Andre149. Thanks!

Sorry for the delay. Finally got around to getting a pic of the lot. There are alot of pieces in the big ziplock bag that I put away so DS5 wouldn't eat them, lol.

How much would you want for just the pirate ship and accessories?

Mylilboyblue said:
How much would you want for just the pirate ship and accessories?
Click to expand...

I am waiting to hear back from a mama who wanted the whole lot. If she passes I will sell each lot for $25 each plus shipping.

If no one's put dibs on the animal clinic if the other mama falls thru, DD would live it

tarynsmum said:
If no one's put dibs on the animal clinic if the other mama falls thru, DD would live it
Click to expand...

Andre149 has first dibs on the animal clinic. If she passes then you are next in line. I will let you all know something hopefully by this evening.

Bump. Willing to sell as a LOT or as seperate playsets to anyone interested. Updated with prices in the original listing.

Bump for sold and pending. Still have the Family Camper left for sale and just realized tonight that half the family was MIA. Dad and son must have took an extended vacation with no intentions of returning...:whistling:

Lowered the price on it since those 2 people are missing and a bike.