Hi
I have a 2015 Dodge Caravan fold down seats. It has 2 tethers in the front seats and 1 tether in the back middle seat. I need a 4th one for the back can i just buy one and have installed?
Ages of children: 3.5yrs, 18 mos, 18 mos and newborn
Any help is appreciated
Thanks
L

Hi! There are no approved retrofits for tether anchors for your vehicle. The good news is that you probably don't need any. You only need them for forward facing harnessed seats, and ideally 3 (or even 4!) of your children would rear face for awhile still. By the time you need to turn the toddlers around, the oldest should be booster ready.

Getting car seats to work in your 3rd row can be a little bit tricky. Can you tell us weights and shirt sizes for the children, along with details on any car seats you already have? And what's a comfortable budget if you need any new seats?
U

Hi
Thanks for the response. My kids are very small especially my oldest (3.5yr) who fits into size 2t and weighs 28lbs. My two other boys are 18 months 22 and 24lbs each last they were checked.
I will have to put one of the twins in the back rear facing and will be impossible to get my oldest in the middle unless he tries to climb through the trunk but then will be very difficult to strap him in?
Our carseats are larger but not sure how sizes will make much a difference for us? Babytrend stage 1 baby carseat, 2 graco 4ever all in 1, 1 graco multi stage.
Thanks any help is appreciated since 4 th baby will be here soon
Sheena
L

Ok, so I don't think any of those will work outboard 3rd row, other than maybe the infant seat, which is probably not the way you want to go.

I would get a Cosco Scenera NEXT (currently less than CDN$75 at http://www.walmart.ca/search/cosco scenera next
--the solid color ones have nicer fabric than the prints). It's one of the few convertible car seats that work in those outboard positions.

You'll need to load through the tailgate, and you might find that it's easiest to just load 2 kids rear facing back there, rather than try to reach a forward facing kid when you're already loading one kid through the hatch. So a Scenera NEXT passenger side, and probably a 4Ever installed with lower anchors in the 3rd row. Then the baby and whatever other kid and whatever car seat you want in the captain's chairs.

Note that the Scenera NEXT has to be installed very upright back there, so it shouldn't be used for the newborn until s/he has good head control. (Upright installation is allowed, with the head control caveat.)
U

Ok thanks so much. I guess in a couple years we will need to buy a new vehicle once all kids are forward facing if my oldest isnt heavy enough? Do you know of vehicles with 4 tethers?
U

Also, just to be clear...if i put the twins rear facing in the 3rd row 1 would be using tether in seats and the other we would use the seatbelt?
Thanks
L

Here are some photos of a well installed Scenera NEXT passenger side 3rd row in a Town & Country: 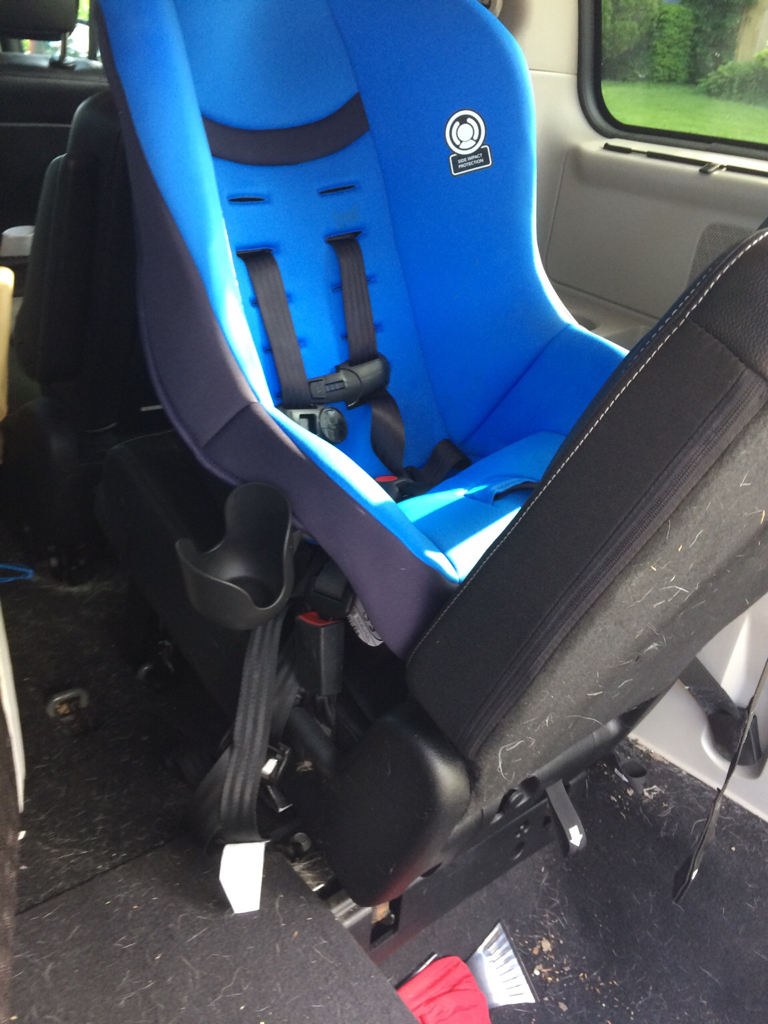 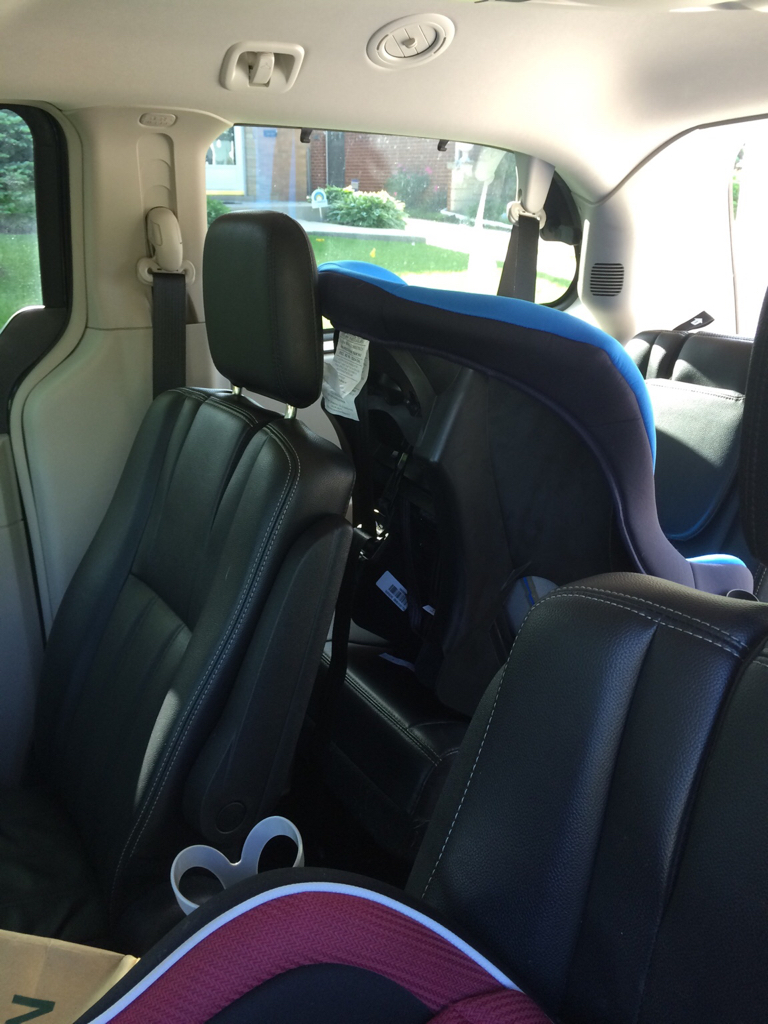 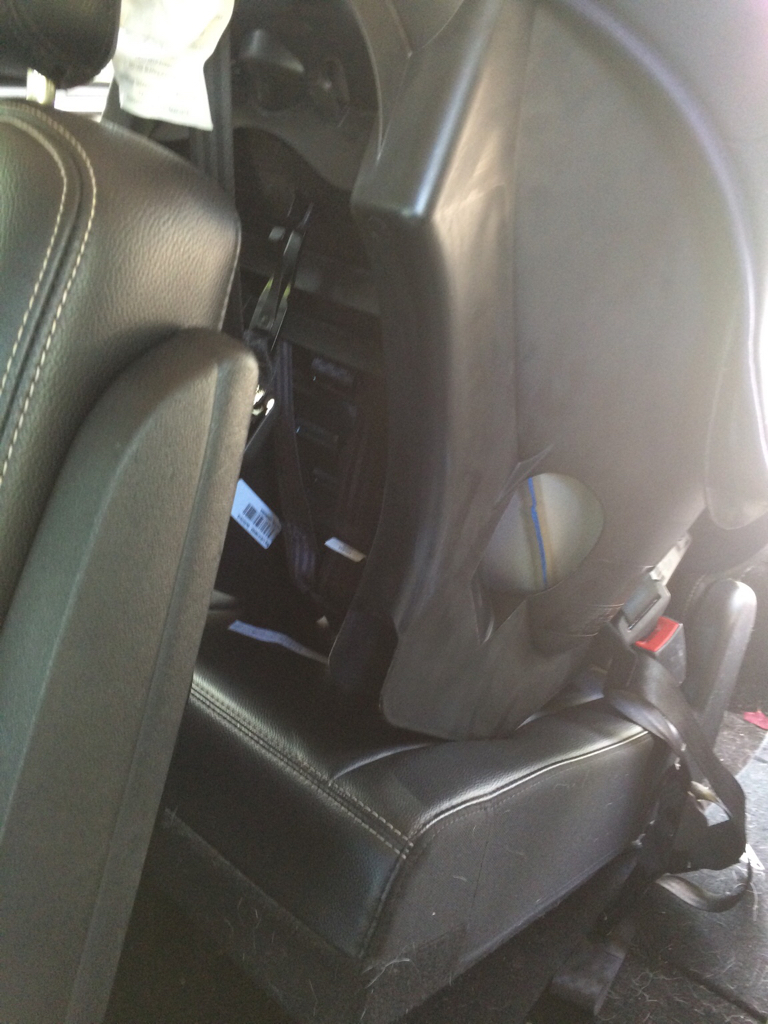