DD's pre-K class is taking a field trip. They are taking a little bus (bus, not van I have been assured). She is so very excited. Me, not as much. She's still in a 5-pt in both of our vehicles (she is still wiggly and sleeps often). I need tips to prepare her (and me!) for the ride. Oh, she's 5 yo and was just above 40# at her last doc appt. TIA

I would just stress to her to sit up with legs right. Wiggly doesn't matter as much if there aren't any seatbelts. Her protection is from sitting in the seat, not from a lap/shoulder belt being positioned correctly on her. DS has been riding a school bus all year, but only recently using a booster occasionally. As long as she won't be standing up or turning around, I think she is prepared. I was nervous at first, but now I feel better about them on a bus than a van with a booster.
D

this subject has really been bothering me lately too. My DD will be starting kindergarten in the fall and most likely will ride the bus, she's also still in a 5 point harness, I have huge anxiety about her being on a bus with not even a lap belt

My DS will be on a bus in the fall as well. I know that statistically he's safer in the big huge yellow school bus than in my car any day. I'm not worried about it at all.

Just stress to your daughter that she needs to stay in her seat. I'm sure there will be several teachers or other adults along to make sure the children are staying seated.

Thanks for helping me organize my thoughts!
*Sit on your bottom.
*Don't turn around or sideways.
*Don't stand up or try to walk around.

Her teachers are great. I'm sure there will be one, if not two teachers on the bus.

I think this is the first time she will ever go somewhere without me, DH, or a close relative. Eeek!

Yeah, even if they aren't thinking "bus safety", I'm sure the teachers will want everyone sitting right just so they don't get wild.
A

My DD started going on Kindergarten field trips at barely 5 yo and I was very nervous, especially knowing they'd be traveling 65 MPH followed by windy roads. Until then, 99% of her car travel had been with me and never with a stranger driving. And even though I understand that it is statistically safer, it still makes me nervous and I'd like to see more info on the little buses (our school uses both). So you're not alone in not being excited about it.

I can't remember exactly what I said, but I definitely told her to stay in her seat, since this was the first time she wasn't strapped into a harness, and her teacher sat with her (because I'm the only neurotic mom who asked questions ). I'm realizing now I'll have to deal with this again next year when DD2 goes to Kindergarten. Good luck!

I am relieved I'm not the only one!

I hate to be the bearer of bad news, but it's really hard to sit still when you're five and everyone else is bouncing around.

I wouldn't worry too much about the field trip, since as PP have said, there should be plenty of supervision, but I'm not sure how comfortable I would be with my 5 year old riding daily.

I drove a school bus of kindergarteners (full size bus, but maybe 20 kids?) for several weeks (I was a sub for somebody on leave on that route) and even with fun kids CD's and lots of vigilance, I was doing really well if they were sitting 75% of the time. They couldn't see over the high seats, so they were always standing up or climbing to look over!

Gosh, isn't that true! And that is only one reason DD won't be riding the bus once school starts. I plan to do pu/do. Field trips and other activities will be the only bus time.

Don't get me wrong. I grew up riding the bus and have nothing against them. Sure, I'm nervous. But that's mostly bc firsts can be scary! I just really want the extra time with her before and after school and am thankful to be able to do it.

BTW, when we were talking about sitting still, DD asks, "Can I talk?" LOL!

Okay, this is the bus. The seats are not the big, bench seats I was expecting. DD is super-excited. My stomach is in knots. This is still okay, right? 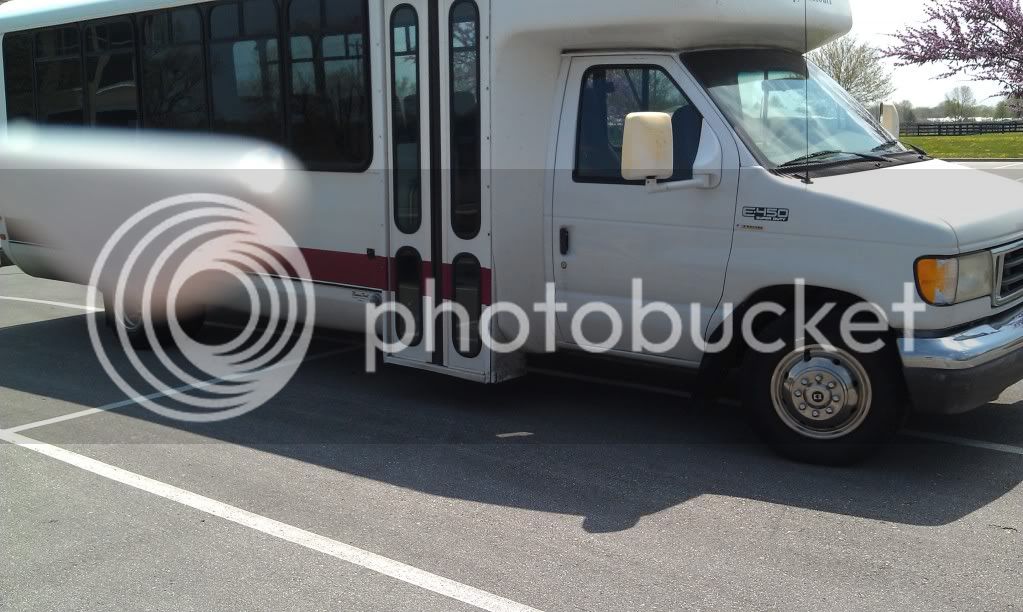 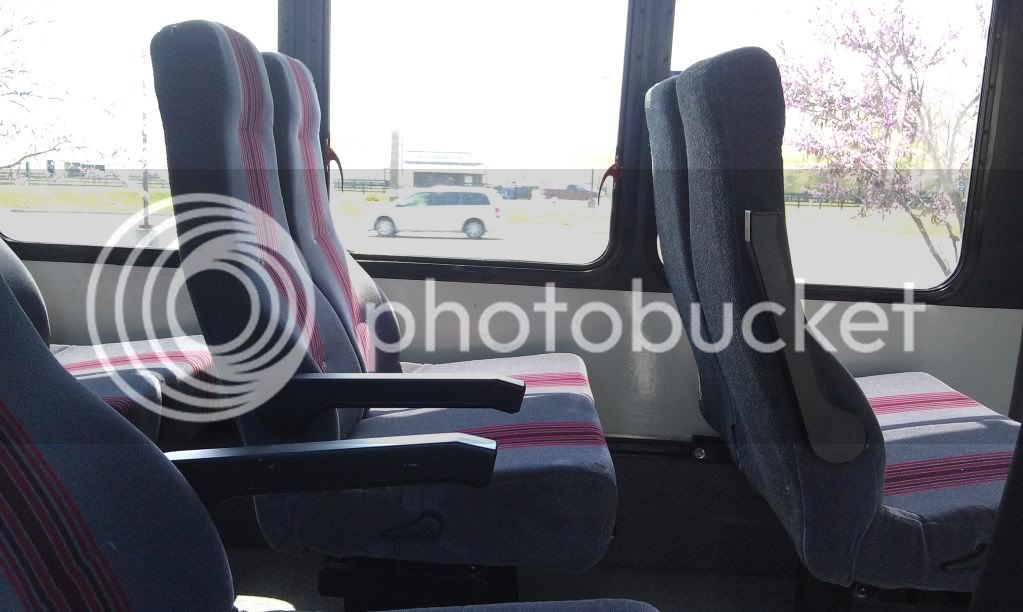 Bump for the after lunch crowd.
H

That's the kind of van we have for our church (but it has lap belts that fit over the thighs/hips) and I personally will not allow my kids to ride in it.

I do let my DD ride a school bus and have since she was in K.

I don't know if the compartmentalization safety of the school buses apply to the van/bus type you posted b/c while the seat backs are high, they are further apart than school bus seats are (Or chartered bus seats which DD has ridden in too).

I was told it was "just like a school bus" but found this at dropoff. Ugh! I almost cancelled my plans for the afternoon to personally drive her on the field trip, but wondered if I was being irrational. This was a one-time event, and the round trip was a matter of a couple miles. So, I let her go. They got there and back safely. However, DS will be in this same situation in a couple of years.

I wish I knew and hope someone can answer this. I'd really like to have a better idea of which options are safe, but don't know how to find out. I am still wondering if the mini buses are okay (the type that really resemble a school bus, but at half size).

I understand the full size school buses are safe enough for kids over 40 or preferably 50 pounds. I understand that vans don't magically become safe because someone puts a school bus sign on them, even though some state laws may then not require proper restraint (makes no sense). But something like this or the half size buses, I have no idea. My DD will be taking some field trips soon and I wish I knew.

Thanks for asking the question. Glad to hear her field trip went well.

Thanks. Yeah, I hope someone comes along who can break it down a bit. (Full-size school bus, vs small school bus, "bus" pictured, shuttle bus, etc.)

I am not an expert. But, I know that around here, full-size busses are exempt from child restraint laws, but mini busses are not. That tells me there is a difference in physics/safety/protection. Hopefully someone with better info can chime in to give a better answer.

I accidentally got unsubbed from this thread and didn't see this until now. Thank you for the info. Yes, hopefully one of our bus experts will chime in!
A

Carrie_R said:
I am not an expert. But, I know that around here, full-size busses are exempt from child restraint laws, but mini busses are not. That tells me there is a difference in physics/safety/protection. Hopefully someone with better info can chime in to give a better answer.
Click to expand...

The half size things that look like miniature sized school buses? Our school uses those sometimes. I wish I knew more on this topic or how to find out. I've already sent an email asking what they will be using this time, but that only helps if I know what's okay for her to ride in. I'm sure I'm the only parent even asking and they probably think I'm nuts, but I wonder why I'm the only parent asking.
M

Full sized school buses are often exempt/don't have seat belts due to their massive size and weight. Compartmentalization in school buses, in both mini and full size, is accomplished by high backed, well padded on all sides/surfaces, closely spaced seats. Also, at least here in Canada and I imagine as well in the United States, school bus standards (full and mini sized) include requirements such as smooth ceiling/walls with no sharp edges, windows designed with the horizontal centre bar to prevent ejection through the window, strength standards for the windows and frames, doors and frames for the same reason.

Back to the closely spaced and padded seats, the idea being a child seated correctly will remain in their "compartment" in a frontal collision and only strike padded surfaces. Due to their heads being proportionally heavier, this is not as protective for children under 40 pounds and they are recommended to be in 5 point restraints by many transportation groups, school districts etc.

Now as previously stated the seats on the shuttle bus above are most certainly not as closely spaced as school bus seats, and certainly the seat backs are not padded in the way school bus seats are to absorb impact. As well the windows are huge, not specially designed to prevent ejection like on a school bus. So personally I most certainly would not consider this to be on the same level as a school bus.
Share:
Facebook Twitter Reddit Pinterest Tumblr WhatsApp Email Link